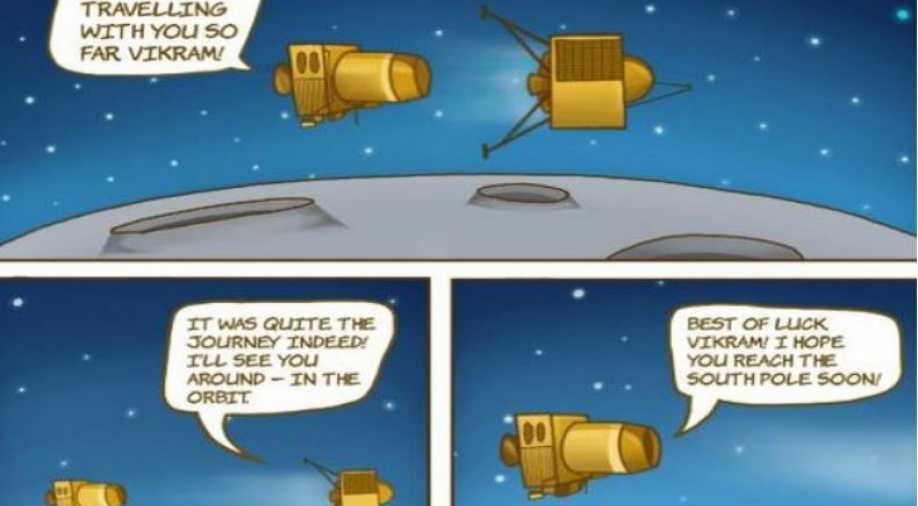 Ahead of the landing Chandrayaan 2 near the moon”s south pole at 1:43 a.m. on Saturday, the Indian space agency has posted a message on Twitter featuring the spacecraft Lunar Orbiter extending good wishes to the Lander Vikram

Chandrayaan 2, which was launched on July 22, will attempt a lunar surface touchdown on Saturday.

An animated picture posted on the Indian Space Research Organisations” (ISRO) social media handle shows the Lunar Orbiter saying at the time of releasing Lander Vikram: “It was great travelling with you so far Vikram. Best of luck! I hope you reach the South Pole soon”. To this Vikram replies, “It was quite the journey indeed! I”ll see you around – in the orbit.”

“We have the same wishes for Vikram, Orbiter. Want to stay in touch with Vikram and Pragyan as they make their way to the untouched lunar South Pole and uncover its many mysteries? Then keep an eye out for the next edition of CY2 Chronicles!,” the ISRO tweeted.

Soon, the twitterati poured thousands of responses on the same thread.

“By the grace of God..ISRO will achieve the goal today night…BOL..jai hind,” wrote a user.

“#Chandrayaan2 mission is reaching its apex, Indians will wake up to the dream of reaching the moon tomorrow. A magic moment not to be missed! Kudos, ” wrote another user.

Prime Minister Narendra Modi, who will watch this soft landing along with 60 shortlisted students, also took to Twitter to express himself. “The moment 130 crore Indians were enthusiastically waiting for is here!In a few hours from now, the final descent of Chandrayaan – 2 will take place on the Lunar South Pole,” he tweeted.