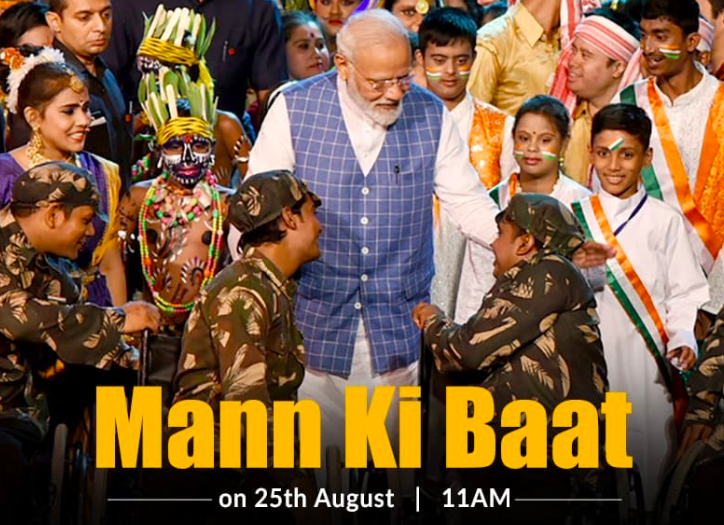 Prime Minister Narendra Modi addressed the nation through his monthly radio broadcast titled ‘Mann ki Baat’. This comes a day after he addressed a gathering in Bahrain and was conferred the highest civilian award by the King of Bahrain.

Delighted to connect thanks to #MannKiBaat. Here’s today’s episode. https://t.co/fAweeKTHW5

Remembering Swami Vivekanand’s speech delivered on September 11, 1893, PM Modi remarked, “Come, let us look anew at India which Vivekananda had seen and let us put in practice the inherent strength of India realized by Swami Vivekananda. We possess everything within us, let us proceed with confidence.” He also reminded listeners that August 29 is celebrated as ‘National Sports Day’ and urged people to partake in the ‘Fit India Movement’.

We need to move beyond conservation, and think about compassion: Narendra Modi on nature and wildlife

A clarion call for doing everything possible to protect our wildlife. #MannKiBaat pic.twitter.com/s8zdYwEO5G

My dear countrymen, the concern and care for the environment in India seems natural. The Tiger Summit took place in 2010 at St. Petersburg, Russia. At this summit, a resolution was taken expressing concern about the dwindling tiger population in the world. Whenever we talk about nature and wildlife, we only talk about conservation. But, we now have to move beyond conservation and think about compassion,” PM in his ‘Mann ki Baat’ asserted.

Significantly, This month’s radio show with a lot of focus on environmental challenges, The PM touched upon his ‘Man vs. Wild’ episode and remarked, “Whoever I meet or wherever there is a chance to talk, the focus is on Wildlife, discussions about the environment, the Tiger, the Asiatic Lion, evolution etc. And I am amazed how interested people are in nature. It is my firm belief that people want to know the steps taken in the direction of climate justice and clean environment in India”.

Read Also, Strength I gained living in Himalayas still within me: PM Modi

While commenting on his ‘Man vs Wild’ episode with Bear Grylls, the PM marked that the people expressed desire to know more and stated that he had established a connect with the youth around the world with just one episode. “I had never thought I would find a certain place in young hearts in this country and the world pays attention to diverse things”, also adding that Discovery channel is planning to broadcast the programme in 165 countries in their respective languages.

This time, among the most number of comments for #MannKiBaat came on the episode of ‘Man Vs Wild’ including some interesting questions on how @BearGrylls and I conversed.

Quashing people’s doubts on how the PM Narendra Modi and Bear Grylls understood each other while speaking in respective languages and maintained a fast conversation. “Whenever I spoke immediately, there was simultaneous translation into English or simultaneous interpretation and he (Bear Grylls) had a small cordless instrument in his ear. So I used to speak in Hindi but he heard it in English and because of that communication became very easy and this is an amazing aspect about technology.”

During today’s #MannKiBaat, I have made some requests to my fellow Indians:

Visit iconic places relating to Bapu as a part of his 150th Jayanti.

Travel to places related to nature and wildlife.

Be a part of Fit India movement https://t.co/vfg9q3u0si

The PM concluded today’s episode by asking people to pitch in their suggestions. “Come, let us all march together to make the India which was dreamt of by our freedom fighters and realise Gandhi’s dreams- ‘Swantah: Sukhayah’. Speaking of the Centre’s scheme, SBM, “We organize cleanliness drives before Gandhi Jayanti every year to commemorate the leader’s birthday and this time around it will commence on the 11th of September. During this period, all of us will move out of home, donating our effort and sweat through ‘shramdaan’ as a ‘Karyanjali’ to Mahatma Gandhi.”