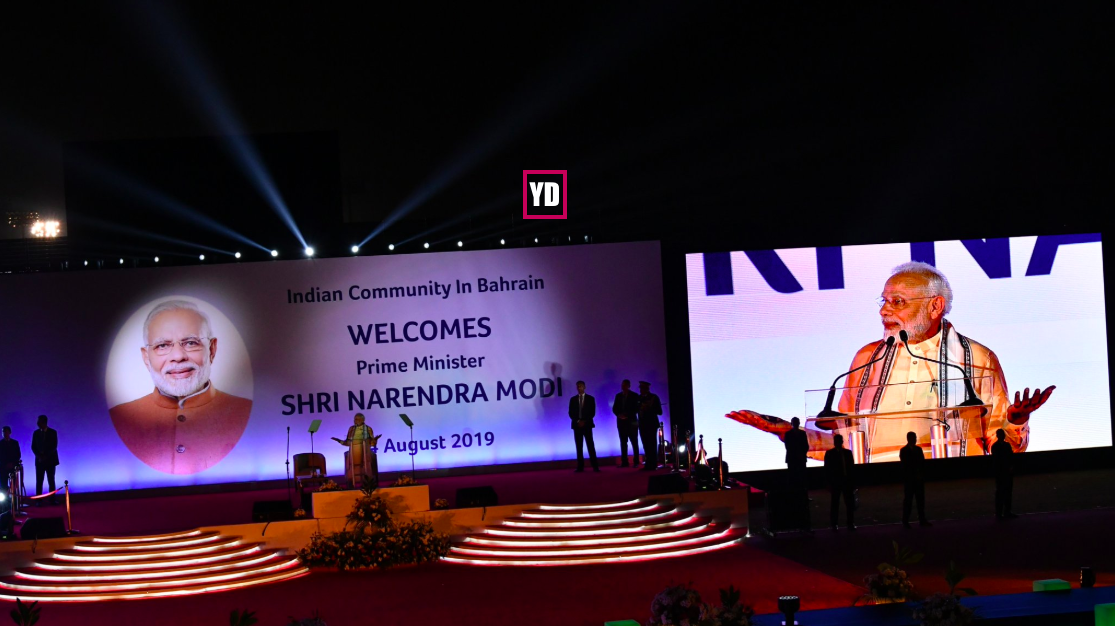 My friend Arun Jaitley loved India, loved his party and loved being among people.

It is upsetting and unbelievable that a person I have known since our youth is no longer in our midst.

I pay my tributes to him. pic.twitter.com/lFkCXxfxqS

Prime MInister Narendra Modi on Saturday appealed to the Indian community in Bahrain to motivate the Bahraini people to visit India to witness its rich cultural heritage, stressing that India has decided to achieve the target of becoming $5 trillion economy in the next five years.

Addressng the Indian community, the Prime Minister said, “My visit to Bahrain may be as Prime Minister, but my objective is to meet the Indians settled here and communicate with millions of Bahraini friends.”

Modi also greeted the people on the occasion of Janmashtami and said, “I have been told that there is a tradition of narrating Krishna Katha on Janmashtami in the Gulf region. Tomorrow I will visit Shrinathji”s temple and pray for the prosperity and peace of all of you and your host country,” he said.

“It is also a matter of happiness that tomorrow the redevelopment work of this temple will be formally started,” he said.

The Prime MInister said that India has decided to double its economy in the next five years. “The $5 trillion economy target is in front of us and we have a roadmap to achieve that,” he said, adding, “various global surveys and indices have shown India”s progress.”

I humbly accept The King Hamad Order of the Renaissance. This is a recognition of India’s strong friendship with Bahrain, which goes back hundreds of years and is expanding rapidly in the 21st century. pic.twitter.com/Ct3zTIGZnx

He said, facilities such as BHIM App, UPI and Jan Dhan account have made banking in India accessible to the general public. “Our Rupay card is now becoming a preferred medium of transaction all over the world. Now our Rupay cards are accepted by banks and sellers all over the world,” Modi said.

“I am glad that you will be able to transact in Bahrain soon with RuPay card. We have signed an MoU for using the RuPay card. Our intention is to provide you a facility to send money home in India through the RuPay Card,” Modi said.

The Prime MInister also highlighted how his government launched the Chandrayaan 2 mission with minimum expenditure.

Wonderful meeting with HM Hamad bin Isa bin Salman Al Khalifa, King of the Kingdom of Bahrain. His Majesty and I reviewed the complete range of India-Bahrain relations and we look forward to increased cooperation for the mutual benefit of our citizens. pic.twitter.com/vIiVuPlP2M

“All of you know that on September 7, India”s Chandrayaan is going to land on the surface of the Moon. The entire world is discussing India”s space mission today. The world is astonished how we are able to do this in such a small budget, using our skills,” the Prime MInister said.

The Prime Minister also praised the Indian diaspora for making the counrty proud by their hard work and honesty. “There is immense goodwill here for your honesty and loyalty. You have made a place for yourself with your hard work. We have to strengthen this goodwill,” Modi said.

The Prime Minister also condoled the death of former Finance Minister Arun Jaitley and said, “We started the political journey together and his death is a personal loss for me.”