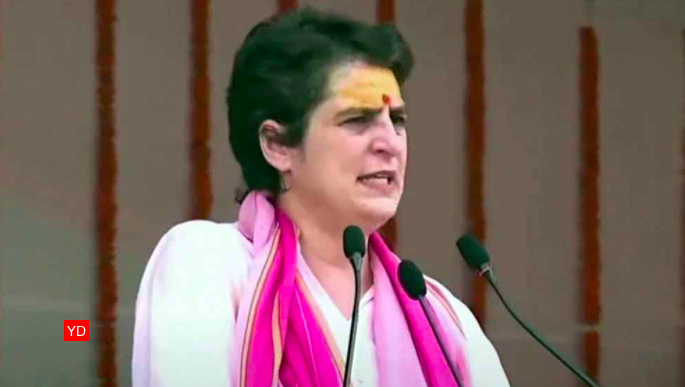 Congress general secretary Priyanka Gandhi Vadra on Sunday accused the government of the bid to save a Union minister’s son in the Lakhimpur Kheri violence case and said except BJP leaders and their “billionaire friends” nobody is safe in the country.

Vadra said this during a “Kisan Nyay Rally” in PM Narendra Modi”s constituency Varanasi, days after eight people, including four farmers, were killed in the violence. Union Minister Ajay Mishra’s son Ashish has been arrested in connection with the case.

The Congress leader also attacked the prime minister, saying he travels across the country and abroad but did not have time to talk to farmers protesting over the Centre’s farm laws, just at a distance of 10 minutes from his residence.

The PM recently visited Lucknow for an exhibition but could not reach Lakhimpur Kheri, a distance of just two hours, to wipe the tears of farmers, who gave freedom to the country, she said. Priyanka said Mahatma Gandhi fought for the freedom of the country so that the poor and labourers could get justice. But due to this government, people have given up hope of justice, she alleged.

“In this country, the son of the (Union) Minister of State for Home crushed farmers under his car but the government was trying to save him,” the Congress leader alleged. Nowhere in the world would the police invite a murder accused for interrogation, she said. Priyanka said people should compel those in power to give justice.

“The Congress workers do not fear anyone even if you put them in jails or beat them. We will continue to fight till the Union MoS (Ajay Mishra) resigns. Our party has fought for the country”s Independence and no one can silence us,” she said.

She also said families of aggrieved people in the state, be it from Sonbhadra (where 13 tribals were killed), Hathras or even Lakhimpur Kheri, said they do not want compensation but justice, of which they have no hope.

“Time has come and I am not talking about the elections, I am talking about the country. The country is not the fiefdom of BJP office-bearers, their ministers or the prime minister. This is your country. If you do not become aware and remain entangled in their politics, then neither will you be able to save yourself nor the country,” she said.

About the farmers” protest, she said, “Farmers are protesting against farm laws for the past 10 months and 600 of them have lost their lives. They are protesting because their farm, income and produce will go to the billionaire friends of Modiji through the provisions of these (central) laws.”

“The billionaire friends of Modiji purchased apples last year at Rs 88 per kg in Himachal Pradesh and this year, it was purchased at Rs 72 per kg. everybody is compelled to sell apples at lower price. This situation will prevail in the country when the laws are implemented,” she claimed.

The PM who calls himself a ”Gangaputra”–son of the Ganga–has insulted crores of “Gangaputras” by hatching a conspiracy to give their crops and income to his billionaire friends, Priyanka alleged.

Priyanka said when she speaks to people, they tell her that there are no jobs and income. Farmers, Dalits and women are feeling harassed, she claimed. People may belong to any caste and religion, they are not safe, the Congress leader alleged.

“In this country, the prime minister, his council of ministers, people from his party and their billionaire friends are safe. Understand this properly. The country is getting destroyed,” the Congress leader said.

After Priyanka reached the rally venue, the Congress leaders present on the stage raised the religious slogan of “Har Har Mahadev”. At the beginning of her speech, Priyanka recited “Sanskrit shlokas” and chanted “Jai Mata Di”. Senior UP Congress leader Pradeep Mathur told PTI that Congress workers from different walks of life accorded a warm welcome to the party general secretary.

State Congress spokesperson Ashok Singh said with Sunday”s event, the party has launched itself aggressively for the upcoming 2022 UP Assembly elections. “The Congress under the leadership of Priyankaji will comprehensively defeat the demon power, which has unleashed itself in various parts of the state,” Singh said.