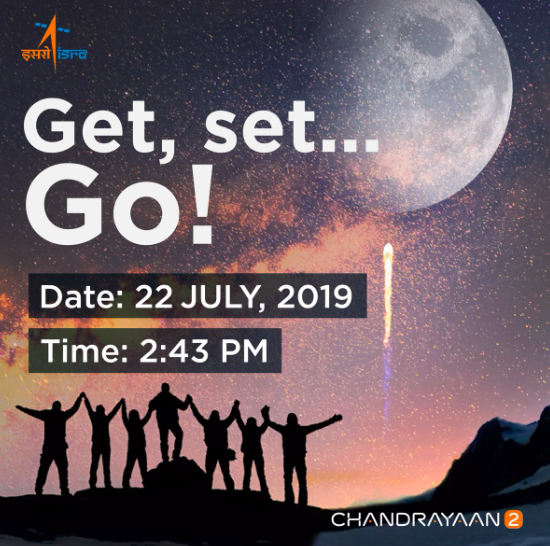 Following the official input, Chandrayaan-2 launch, which was called off due to a technical snag on July 15, 2019, is now rescheduled at 2:43 pm IST on Monday, July 22, 2019, ISRO – Indian Space Research Organisation asserted. Thus, Chandrayaan 2 is ready to take a billion dreams to the Moon — now stronger than ever before, ISRO! While A successful landing would make India the 4th country to achieve a soft landing on the Moon, after the space agencies of the USSR, USA and China. Interestingly, GSLV-Mk III will be used for India’s manned space mission slated in 2022.

According to ISRO, “It is an Indian lunar mission that will boldly go where no country has ever gone before – the Moon’s south polar region. Through this effort, the aim is to improve our understanding of the Moon – discoveries that will benefit India and humanity as a whole. These insights and experiences aim at a paradigm shift in how lunar expeditions are approached for years to come – propelling further voyages into the farthest frontiers”.

About Launcher and the Spacecraft: Chandrayaan-2

Launcher: According to ISRO, The GSLV Mk-III (

Geosynchronous Satellite Launch Vehicle Mark-III), has been completely designed and fabricated from within the country. It will carry Chandrayaan 2 to its designated orbit. This three-stage vehicle is India’s most powerful launcher to date, and it is capable of launching 4-ton class of satellites to the Geosynchronous Transfer Orbit (GTO). Significantly, The 640-tonne rocket GSLV-Mk III, about 44-metre tall, popularly known as ‘Bahubali’ will carry the 3.8-tonne Chandrayaan-2 spacecraft. Sixteen minutes into its flight, the Rs 375-crore GSLV-Mk III rocket is expected to sling the Rs 603-crore Chandrayaan-2 into an Earth-parking 170×40400 km orbit.

Orbiter: It will observe the lunar surface and relay communication between Earth and Chandrayaan 2’s Lander – Vikram. At the time of launch, the Orbiter will be capable of communicating with Indian Deep Space Network (IDSN) at Byalalu as well as the Vikram Lander. The mission life of the Orbiter is one year and it will be placed in a 100X100 km lunar polar orbit. The orbiter will orbit the Moon at an altitude of 100 km (62 mi (Weight: 2,379 kg and Electric Power Generation Capability: 1,000 W), As per the official source reported.

Vikram Lander: According to ISRO, It is designed to execute India’s first soft landing on the lunar surface. The Lander of Chandrayaan 2 is named Vikram after Dr Vikram A Sarabhai, the Father of the Indian Space Programme. It is designed to function for one lunar day, which is equivalent to about 14 Earth days. Vikram has the capability to communicate with IDSN at Byalalu near Bangalore, as well as with the Orbiter and Rover. The Lander is designed to execute a soft landing on the lunar surface. Weight: 1,471 kg and Electric Power Generation Capability: 650 W.

Moreover, Chandrayaan-2 will travel for nearly 3.844 lakh km, carrying lander ‘Vikram’ and rover ‘Pragyaan’ to the moon. On September 6 or 7, Vikram is expected to make a soft landing on the moon and then Pragyaan will roll out to carry out in-situ experiments. Notably, The first one was on 18.12.2014 carrying Crew Module Atmospheric Reentry Experiment. The second and third GSLV-Mk III went up on 5.2.2017 and 14.11.2018 carrying communication satellites GSAT-19 and GSAT-29 respectively.

Following the Indian space agency, The Moon is the closest cosmic body at which space discovery can be attempted and documented. It is also a promising test bed to demonstrate technologies required for deep-space missions. Chandrayaan 2 attempts to foster a new age of discovery, increase our understanding of space, stimulate the advancement of technology, promote global alliances, and inspire a future generation of explorers and scientists.

(4) 4th country ever to soft land on the lunar surface etc..

Significantly, The primary objectives of Chandrayaan-2 are to demonstrate the ability to soft-land on the lunar surface and operate a robotic rover on the surface. Scientific goals include studies of lunar topography, mineralogy, elemental abundance, the lunar exosphere, and signatures of hydroxy and water ice. Moreover, Moon provides the best linkage to Earth’s early history. It offers an undisturbed historical record of the inner Solar system environment.

The document said that, Though there are a few mature models, the origin of Moon still needs further explanations. Extensive mapping of lunar surface to study variations in lunar surface composition is essential to trace back the origin and evolution of the Moon. Evidence for water molecules discovered by Chandrayaan-1, requires further studies on the extent of water molecule distribution on the surface, below the surface and in the tenuous lunar exosphere to address the origin of water on Moon.

The lunar South Pole is especially interesting because of the lunar surface area here that remains in shadow is much larger than that at the North Pole. There is a possibility of the presence of water in permanently shadowed areas around it. In addition, South Pole region has craters that are cold traps and contain a fossil record of the early Solar System, As per ISRO asserted.

However, Chandrayaan-2, has evoked great interest in International Media and Journals. According to Sputnik International, The total budget of this mission is about $124 million, which includes a $31 million price tag for the launch and $93 million for the satellite. “The total budget is less than half of the budget of Hollywood blockbuster “Avengers Endgame”, which had an estimated budget of $356 million,”.

According to official inputs, As of June 2019, the mission has an allocated cost of ₹978 crore (approximately US$141 million) which includes ₹603 crore for space segment and ₹375 crore as launch costs on GSLV Mk III. Thus, Chandrayaan-2 will attempt to soft land the lander -Vikram and rover- Pragyan in a high plain between two craters, Manzinus C and Simpelius N, at a latitude of about 70° south.

Despite all of this, The Chandrayaan-2 mission is the most challenging and technologically complex because ISRO will not only be putting the orbiter around the moon but also soft-landing the lander on lunar soil and deploying the rover, which will be driven around the moon’s surface. The lander, with the rover inside, after separating from the orbiter circling above the moon, will slowly descend and gently land on the South Pole of the moon, on September 6 or 7. So, It will take 53 to 54 days to travel the 3.84 lakh km from the earth to the moon’s surface. Thus, Chandrayaan-2 is the First ever mission to soft land near the lunar south pole.