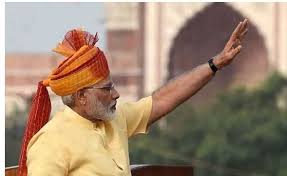 With the revocation of special status for Jammu and Kashmir, Indians can now say with pride ”One Nation, One Constitution”, Prime Minister Narendra Modi said on Thursday, and outlined the future path of his government for the next five years, stressing on population control, cutting down on plastic use, drinking water for all, creation of a Chief of Defence Staff post and thrust on infrastructure.

Addressing the nation from the ramparts of the Red Fort, with a colourful safi tied round his head, Modi said that in his first term he brought the country back on track, and “it is moving fast”. But his new mandate is to fulfill the dreams and aspirations of the people of a 21st century, of a country that can soar high. “In the next five years we will take the country forward, we are fulfilling the works one by one.”

On revocation of Article 370 and 35 A that gave special status to Jammu and Kashmir, he asked what was the reason that the clauses were allowed to remain though they did not help in the development of the people of the state.

Modi, whose speech lasted over one and a half hours, said his government”s policy is not to side-step problems or allow them to fester.

“But now things have come to such a pass that there is no time to even ignore problems,” he said, adding the fact that the Jammu and Kashmir Reorganisation Act, 2019 was passed in both houses of Parliament with two-third majority that indicated that people were in favour of it.

He said that both the articles had over the past 70 yeas fanned separatism and terrorism in the state and nurtured dynasties, “so that corruption and divisions were created” in the state and common people deprived of the benefits of central laws.

He said the new arrangement of two Union Territories of J&amp;K and Ladakh will allow the people there to directly communicate with the Central government without any restrictions.

Attacking the opposition for supporting Article 370 and 35A, Modi said they were doing it only for political gains. “Those speaking in favour of it, the country is asking if Article 370 was so great, and was so beneficial to the people, why didn”t you change it to permanent? If you had the conviction you could have changed it.”

Modi said: “From the Red Fort, I can say with pride that every Indian can say ”One Nation, One Constitution”. Sardar Patel”s dream of one Bharat has been realised.”

In a major announcement, Modi said the government would create a Chief of Defence Staff (CDS) post, a long-pending recommendation of various defence panels.

“India will have a Chief of Defence Staff – CDS. This is going to make the forces even more effective. The new CDS post will oversee all the three wings of the armed forces,” he said.

On abolishing Triple Talaq, Modi said it was aimed at benefitting Muslim women. He said the country has taken several steps for women, including ending the evil of female foeticide and child marriage. “If we can take so many steps then why not raise our voices against the evil of Triple talaq, so that our Muslim sisters get equal respect and are part of the country”s progress. The decision is not to be weighed in political terms,” he said.

Modi targetted Pakistan, without naming it, saying that India stands strongly against terrorism, and is presenting before the world the “true colours” of those who shelter and finance terrorism.

“We will expose before the world all exporters of terror. We, together with other countries of the world, will fight those sheltering terrorism, financing and exporting terrorism.”

He said neighbours Bangladesh, Afghanistan and Sri Lanka have been victims of terror attacks.

“So when India is fighting against terrorism, we are playing our role on the world stage,” he said.

He greeted Afghanistan that will in four days celebrate 100 years of independence.

The Prime Minister also for the first time touched on the burgeoning population, which stands at 1.3 billion, and said those who have small families are observing a form of patriotism.

The Prime Minister said the population explosion would cause many problems for the future generations. “But there is a vigilant section of public which stops to think, before bringing a child to the world, whether they can do justice to the child, give them all that she or he wants. They have a small family and express their patriotism to the country. Let”s learn from them. There is need of social awareness.”

On bringing drinking water to every home, Modi said that women in many parts of rural India spend many precious hours trudging kilometres to fetch water. He announced a Jal Jeevan Mission to realise the vision of Har Ghar Jal, or drinking water to every home, with an allocation of Rs 3,59,000 crore. Modi also asked citizens to adopt water conservation in the way in which they adopted the Swachh Bharat campaign.

On eliminating the use of plastic, which is recognised as a global menace, Modi said single-use plastic poses a grave threat to the environment. “The time for implementing such an idea has come. Teams must be mobilised to work in this direction. A significant step must come out by October 2,” he said.

He also spoke on holding simultaneous polls. “The dream of one nation, one tax has been achieved by the implementation of the GST (Goods and Services Tax). Our nation has also successfully achieved One Nation, One Grid in the Power sector. Now today, India is talking about One Nation, One Election. So a discussion must be held on this.”

On agriculture, he suggested that farmers should minimise the use of chemical-based fertilizers.

Touching on the economy, which is witnessing slowing in some sectors, the Prime Minister said his government will invest Rs 100 lakh crore on developing modern infrastructure that will aid in nearly doubling the size of the Indian economy to $5 trillion in the next five years.

“We cannot make incremental changes anymore. We should take high leaps now. This country”s infrastructure needs to be revamped. Hence, we have decided to invest Rs 100 lakh crore for infrastructure.”

He said reforms will continue to be ushered in to help India break into the top 50 countries on the ease of doing business ranking.

“To some the target of nearly doubling the size of Indian economy to $5 trillion in five years may seem difficult. But when we have in five years (of BJP rule) added $1 trillion as compared to $2 trillion size achieved in 70 years of independence, then this target is achievable,” he said.

The Prime Minister said the Indian government is stable today, the policy regime is predictable and “because of this the world is eager to explore trade with India”. “We are working to keep prices under check and increase development. The fundamentals of our economy are strong,” Modi said.

Emphasising on quality export products, he said, the time has come to think about how we can boost exports. “Each district of India has so much to offer. Let us make local products attractive. May more export hubs emerge. Our guiding principle is ”Zero Defect, Zero Effect”,” Modi said.

On making governance smoother, he said: “I always ask, can we not remove the excess influence of governments on people”s lives? Let our people have the freedom of pursuing their own aspirations. Let the right eco-system be made in this regard.”

“Earlier the aspiration was to have a good mobile phone but now, people aspire better data speed. Times are changing and we have to accept that,” he said.