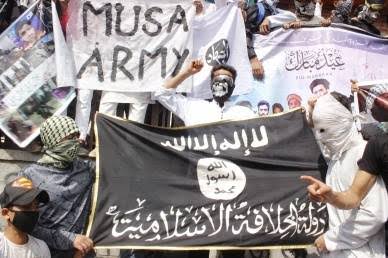 The Indian deep state alarmed over the widespread toxicity of Islamic indoctrination in the Valley of Kashmir, in the main south Kashmir has changed tack on the prism from which it is viewing rising levels of local militancy.

Despite over 100 kills this year, Wednesday’s developments have convinced the deep state that armed insurgency has now turned into a “religious war”. On Wednesday, a 12 minute video sent shockwaves in the security establishment validating this new axiom which the deep state was already aware as a work in progress.

With a more virulent strain of political Islam rapidly enveloping the valley overtaking religious Islam or a more benevolent and softer Sufi Islam, the traction for IS- and Al Qaeda-type of bellum sacrum is growing.

Equally security forces are already doing a fantastic job at keeping such hostility at bay, but the spread of the contagion is worrying. Jihad or holy war a function of proselytisers of Islam which has been propounded as a theory to end the unfinished business of partition by the ISI-Jihadi-military complex of Pakistan is part of this larger Islamic awakening in Kashmir.

But now this new age Islam has to be checkmated by the deep state for it is a call to arms on the basis of religion locally, something that had been stamped out earlier, but now has returned with greater intensity on the back of IS which sees the Kashmir Valley as a fertile breeding ground.

Al Qaeda spokesperson Abu Ubaida also named Ghazi Ibrahim Khalid as his deputy commander.Musa had been advocating the establishment of Sharia in Kashmir and was at constant ideological odds with the Hurriyat hawks while he was alive. In fact, he broke away from the underground militia of the Hurriyat — Hizbul Mujhaideen — to become a flag bearer of IS in the valley.

Eid celebrations and processions in Srinagar on Wednesday once again confirmed the rapidly changing contours of Islamic fundamentalism in the valley, with Pakistani and IS flags openly being waved.

With 13-14 year old stone pewter’s part of the lucre lubricated stone pelting community, the Kashmiri version of the dreaded Intifada in West Bank or Gaza, seamlessly migrating to weaponised training in the jungles of south Kashmir like Shopian, Pulwama and Kulgam, the call for religious war is now a reality.

Taqfir or a call for one Muslim calling for the ex communication of another softer Islam practising Muslim is slowly and surely taking root in the disturbed valley. This way of using arms to kill and declare another Muslim a non believer or Kafir is being seen regularly through the killings of locals in Kashmir.

The act which precipitates Taqfir is termed Muqaffir. On Wednesday in another such incident a Territorial Army soldier home to celebrate Eid was shot dead by terrorists in Anantnag. The jawan identified as Manzoor Ahmad Baig was slain by unidentified gunmen. He was part of the 34 Battalion of Rashtriya Rifles in Shopian. This comes in the long line of such incidents which have led experts to believe that ethno centrism of a different kind is now underway.

With the Kashmiri Pandits having been stampeded out due to ethnic cleansing, it is now the turn of non believing Muslims to be systematically weeded out by IS and al Qaeda backed fighters.