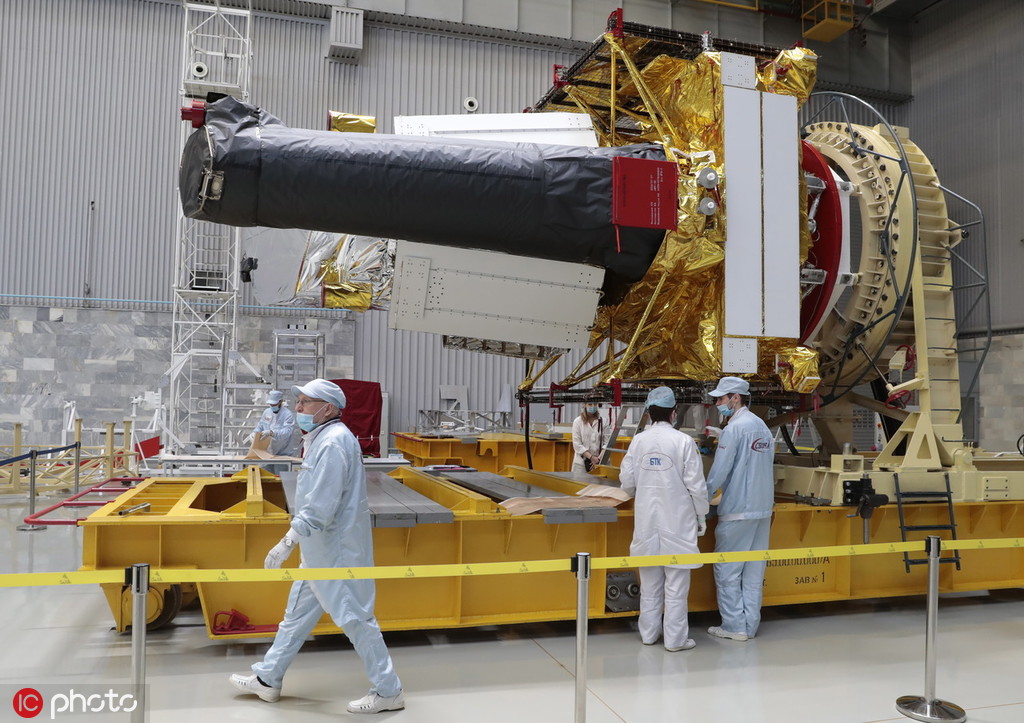 epaselect epa07521431 Employees work over the Spektr-RG space apparatus which comprises two orbital telescopes, Russian and German, at an assembly shop of the Lavochkin Science and Production Association (Lavochkin NPO), a Russian aerospace enterprise, in Khimki , outside Moscow, Russia, 22 April 2019, during Spektr-RG presentation before its departure to Baikonur. Spektr-RG is a Russian-German project aimed at creation of the orbital astrophysical observatory based on the modular principle for exploring the Universe in the X-ray. The Spektr-RG satellite is scheduled to be launched into space by Proton rocket on 21 June 2019 from the Baikonur cosmodrome and to be placed in an L2 orbit. The Spektr-RG is planned to carry astrophysical researches for 6.5 years: it will scan the star skies for four years, and it will spend 2.5 years focusing on observation of objects in the Universe according to request of the world scientific community. EPA/SERGEI CHIRIKOV

The spacecraft was launched from the Baikonur cosmodrome in Kazakhstan on Saturday, which was the second launch of this type of launch vehicle in 2019, Xinhua news agency quoted the statement as saying.

The orbital observatory, equipped with two unique X-ray mirror telescopes, has begun its 100-day flight to explore the universe in the X-ray electromagnetic radiation, it added.

Spektr-RG is a Russian project with German participation, the main goal of which is to build a map of the whole sky with the registration of about 100,000 largest clusters of galaxies and three million supermassive black holes, according to Roscosmos.