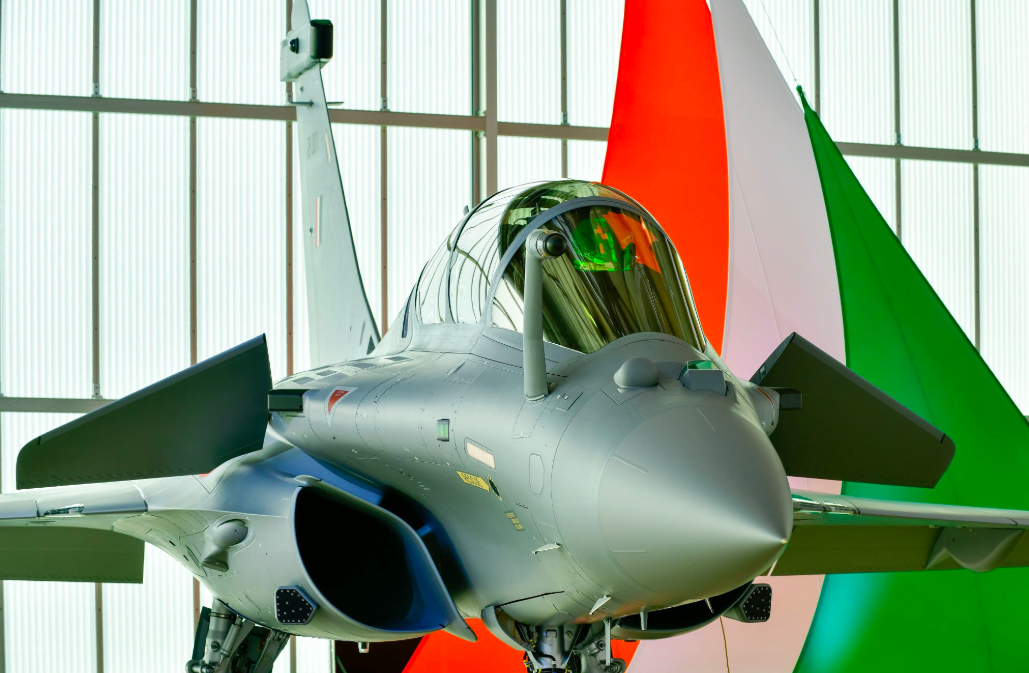 Raksha Mantri Rajnath Singh called on French President Emmanuel ‘Macron’ on Oct 8 and the two leaders discussed stronger India-France defence and strategic ties during their “very warm and productive” meeting (The meeting was described by the ministry of defence as very warm and productive). During the meeting at Elysee Palace, the official base of the French President, the two leaders comprehensively discussed key aspects of bilateral defence partnership and resolved to continue strengthening the ties between the both. Thus, The Indian Air Force on Oct 8 received its first Rafale fighter jet from a series of 36 aircraft purchased from France in presence of Raksha Mantri.

Taking a sortie in Rafale was a memorable and once in a lifetime experience. The induction of Rafale will go a long way in strengthening our national defence.

India will receive the first 18 Rafale jets by February 2021. By April-May 2022 we will receive all 36 jets. pic.twitter.com/we4UeSwdG5

Meanwhile, Raksha Mantri emphasised on the focus to equip Indian Air Force and enhance its capabilities, saying that the new Rafale Medium Multi-Role Combat Aircraft (MMRCA) will make India stronger and will give a boost to its air dominance exponentially to ensure peace and security in the region. Further, Raksha Mantri remarked that, “the strong cooperation between India and France will continue to grow and contribute to global peace, prosperity and environmental sustainability”.

We do not purchase arms and other defence equipments to threaten any country but to increase our capabilities & strengthen our defences.

The credit for the acquisition of the Rafale jets must go to PM @narendramodi . His decisiveness has greatly benefited our national security.

He remarked that he was glad in knowing that a large number of India Air Force officers and airmen are being trained in France for flying, maintenance support and logistics for handling Rafale fighter aircraft and hoped the training in French facilities will help the crew in acquiring knowledge and professional expertise required for performing their task in India. Thus, The significance of the ceremony saying it signifies the depth of strategic partnership between India and France.

He pointed out that the Rafale Project Monitoring Team (PMT) from India has been positioned in France since August 2017 to ensure smooth implementation of the project. He mentioned he was happy that the delivery of Rafale aircraft is on schedule and will add to the strength of Indian Air force. “I look forward to flying in the Rafale aircraft. This will be a great honour and experience”.

He also performed the ‘Shastra Puja’ on Rafale on the auspicious occasion of Vijayadashami on Oct 8, With an ”Om” tilak and laid flowers and a coconut, just before he was to take off in it for a sortie in the newly-acquired two-seater jet. After the meeting, he said, “I thanked President Macron for his strong support to further intensifying our strategic partnership, especially in the defence sector, with India and for our ‘Make in India’ initiatives”, PTI News agency attributed.

#RafaleInduction : Hon’ble Raksha Mantri Shri Rajnath Singh, officially received the first of the 36 Rafale aircraft for IAF today. He is accompanied by Air Marshal HS Arora, Vice Chief of the Air Staff, for the formal acceptance ceremony of the aircraft at Bordeaux, France. pic.twitter.com/DOlBGcmcMG

According to Defence Secretary Ajay Kumar, who is part of the ministerial delegation to France, “We have a multi-dimensional relationship with France and the ties are progressing on all fronts. The talks today are part of a comprehensive defence dialogue between the two countries”. “In the defence sector, the Indian Air Force (IAF) is our longest standing export customer and has been flying Dassault aircraft since 1953. The acquisition contract for 36 Rafale – signed in 2016 – and the modernisation of the Mirage 2000 I/TI are a continuation of this historic partnership,” Dassault Aviation remarked in a press statement.

As per the Defence Ministry, “The meeting demonstrated the depth of India-France bilateral partnership, especially in the defence sector, that has significantly strengthened in recent times. The Rafale is a twin-jet fighter aircraft able to operate from both an aircraft carrier and a shore base. The manufacturers describe it as a fully versatile aircraft which can carry out all combat aviation missions to achieve air superiority and air defence, close air support, in-depth strikes, reconnaissance, anti-ship strikes and nuclear deterrence. Both leaders resolved to take the relationship to the next higher level,” the ministry remarked in a statement.

Significantly, India had ordered 36 Rafale fighter jets from France in a deal worth Rs 59,000 crore in September 2016. While the formal handover ceremony takes place this week, the first batch of four Rafale jets will fly to their home base in India by May 2020. All 36 jets are expected to arrive in India by September 2022, for which the IAF has been reportedly undertaking preparations, including readying required infrastructure and training of pilots, The official report said.

The handover ceremony will be followed by the annual Indo-French Defence Dialogue in Paris. On Oct 9, the minister is scheduled to address CEOs representing leading French defence industry enterprises. As part of a wider ”Make in India” message, Raksha Mantri will invite them to participate in the DefExpo to be held in Lucknow from February 5 to 8 next year.

Greetings to all @IAF_MCC personnel and their families on the 87th IAF Day. The IAF is the shining example of exemplary courage, fortitude, determination and impeccable service to our nation.

These men and women in Blue have the ability to touch the sky with grit and glory.

On September 19, Raksha Mantri Rajnath Singh flew in the Tejas fighter aircraft from the HAL airport in Bengaluru, becoming the ‘first defence minister’ to fly in the indigenously-built light combat aircraft (LCA). The ceremony coincided with the foundation day of the Indian Air Force as well as the Dussehra celebrations.

Despite all of this, Present on the occasion was French Minister of Armed Forces, Ms Florence Parly and Chief Executive Officer of Dassault Aviation, Mr Eric Trappier. The Inter-Governmental Agreement (IGA) for 36 Rafale aircraft procurement was signed between the Government of India and Government of France on 23 September, 2016.

The first Rafale jet will come with tail number RB 001, with RB denoting the initials of Air Chief Marshal Rakesh Bhadauria who played a key role in striking the deal for the jets in his previous role as IAF deputy chief. The Rafale jets intended for India are expected to come with certain bespoke modifications for the IAF and have been awaited as a crucial enhancement to India’s Medium Multi-role Combat Aircraft fleet.