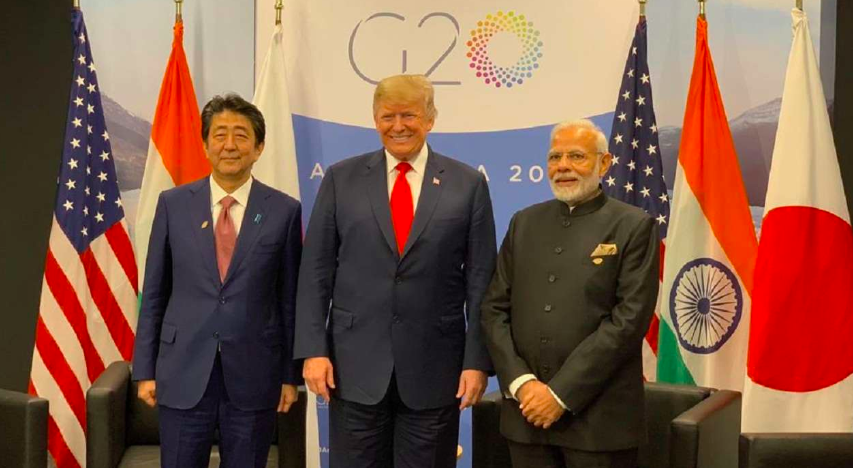 With plans of forging a “strong naval cooperation” in the Indo-Pacific region in mind, Prime Minister Narendra Modi, US President Donald Trump and Japanese Prime Minister Shinzo Abe on Friday discussed ways to jointly build infrastructure and ensure peace and security in the maritime zone.

The three leaders decided to make the summit meetings under the Japan-America-India (JAI) format an annual affair to “ensure successful cooperation in multiple areas, including maritime security, quality infrastructure, and advancing peace and prosperity in the Indian Ocean and Pacific region and beyond,” according to a White House statement.

The leaders “reaffirmed the critical importance of strengthening US-India-Japan cooperation to reinforce shared core democratic values, which promote global security and prosperity,” the statement said on the trilateral meeting.

The deliberations among the three leaders on trilateral military cooperation assume significance in view of China”s assertiveness in the recent times in the region.

China, in order to demonstrate its growing global ambitions, is rapidly expanding its navy and is expanding its footprint in the Indo-Pacific region, including by building infrastructure in several countries dotting the maritime zone.

To counter the growing Chinese assertiveness, the US has been pushing India to assume a bigger role in the region, particularly in the maritime zone which stretches from Africa to the west coast of the US.

“Today”s meeting of the JAI (Japan, America, India) Trilateral was a productive one. We had extensive discussions on the Indo-Pacific region, improving connectivity and infrastructure development,” Modi tweeted.

A White House official, who briefed reporters before the trilateral meeting, said it was an opportunity for all the three countries to “promote a free and open Indo-Pacific region” and to build “a resilient quality secure infrastructure” there.

The official said the leaders planned to discuss “strong naval cooperation”, following up on a recent joint exercise in the South China Sea.

China has been laying its claim on South China Sea and demonstrating its assertiveness in the Indo-Pacific region, to the discomfort of the US and Japan, besides countries in the South East Asia.

Indian Foreign Secretary Vijay Gokhale, while briefing the media on the JAI trilateral, said, “The main topic of the discussion was the Indo-Pacific, about how the three countries can work together in terms of connectivity, in terms of infrastructure, in terms of ensuring that peace and security is maintained and in terms of working together to build upon this new concept so that it benefits the region as a whole and for the three countries of course.”

Abe told reporters that the three countries are the “foundation of peace and prosperity in the region” and thanked the US President and the Indian Prime Minister for their roles.

Significantly, ahead of the JAI trilateral, Trump told Modi during their bilateral meeting, “We will work together in many ways, including military.”

US Secretary of State Michael Pompeo, during his visit to New Delhi earlier this week, highlighted that Indian Navy had recently joined the American counterpart, alongside those of Japan and the Philippines for “group sail for the first time in South China Sea, where we are able to reinforce our partnership in the field of navigation throughout the international waterways.”

China, in pursuit of its increasing global ambitions, is reportedly planning to build at least five aircraft carriers, up from one it currently has. It has also reportedly commissioned two additional destroyers, which will raise the number of its warships to 20.

It has also set up a naval base in Djibouti in the Indian Ocean, two years back.

China is also building infrastructure in countries such as Sri Lanka, Maldives, Bangladesh and Pakistan, which are located in this maritime zone. This is in addition to its ”Belt and Road Initiative” that is proposed to crisscross dozens of countries.

India also displayed recently its pro-active military move when it sent two warships along with aerial support to the Gulf of Oman, mainly to ensure security of Indian flag carrier ships after two ships came under attack in that area.