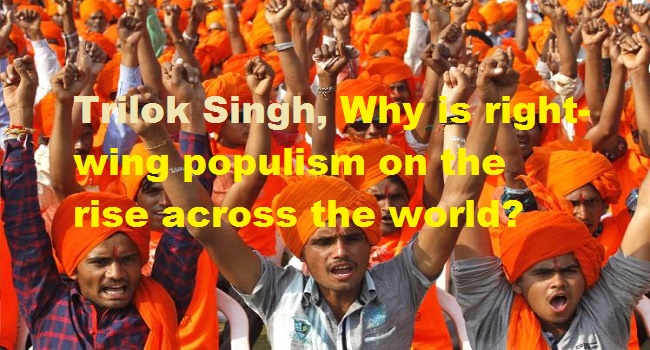 What’s Right Wing –  Trilok Singh, “My group better than that group.” It is an emotional and sentimental approach of superiority towards solving complex issues. Populism is a worldwide revolt of the majority. So, how do you boost that – You spread propaganda which makes you feel rassured that your group is indeed better than that group. And how do you spread such propaganda? In 1930s, it was spread by the states. It continues to be spread even today in countries like North Korea (which is rather called communist) however that doesn’t happen in free countries like UK, USA or India.

However, what does happen is that there are non state actors or plain innocent citizens who are falling to such propaganda being spread through the Social Media. Remember, the “36% of scientists at NASA are Indians” hoax?

Then there was the hoax that “UNESCO has Declared (XYZ) of India to be the best in the world!” Instant 2 minutes adrenaline, isn’t it? I am sure such neat propaganda would be doing rounds in UK and US as well.

That’s phase 1 of how you feel you are better than the others. Next, Social Media is able to over simplify the complex issues.

Now, the problems are mixed with a certain community, even to their whole existence. Here the problems started after the 2007–08 recession which was basically driven by the greed and bad credits. When things started falling some scapegoat was required and I guess in UK and US the immigrants were pointed out.

That’s the phase 2 of the rise of right wing.

So now, people are made to feel that they are better than the others and then the others are the cause of the problems that they face in their every day lives. So what happens next – a non incident is rather created, shared across the social media, and shit hits the fan.

That’s what happened in Dadri, that’s what happened in BRExit referendum and that’s why Donald Trump has been able to become a Presidential candidate. Can you imagine how much of shit goes viral even on facebook, whatsapp and Quora? And if Quora, which is heavily moderated cannot control such factually incorrect stuff, how do you expect to control that on WhatsApp which is not at all moderated. WhatsApp is becoming to be the next weapon of mass destruction and frankly, there is nothing that we can do, other than to spread the stuff of various hoax slayers.

Why is this global right wave on the rise?

Well, I dont know about the socio-political scenario behind Brexit and Trump, but I can explain about my country. Following are some reasons:

These factors may or may not be relevant in other parts of the world, but its certainly relevant in India and thats what contributed the rise of the right-wing here. Change is the only constant.

The world has so far managed to keep the mediocre out of the ruling class. Now it is their time – the mediocre has taken over. Ready access to the social media has in fact helped the mediocre rise. I dont think the majority of the world population is of high intellect. So, may be, now we are actually getting the true representatives to rule. May be this period is required as it prevents scores of people living with pent up anger for not getting ruling representatives who talk their language. Its a cycle. Once the people learn and get a wider view of the world and stuff, perhaps thing will change.