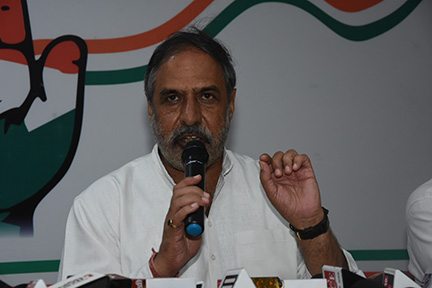 The Congress, for the second time in as many months, on Thursday approached the Comptroller and Auditor General (CAG) Rajiv Mehrishi, seeking an audit of the Rafale fighter jet deal amid alleged corruption in the defence deal with France.

A party delegation including former Union Ministers Jairam Ramesh and Anand Sharma met the CAG and handed over what they claimed new documents pertaining to the deal for the purchase of 36 Rafale jets from France, in its bid to press for the party’s demand for a forensic audit of the scam.

“We met the CAG with new details and revelations on the Rafale deal. More revelations are bound to come up,” Sharma said after the meeting. During its September 19 meeting with the CAG, the Congress had submitted a memorandum detailing various alleged irregularities and claimed these had caused a huge loss to the exchequer and compromised national security.

The party had also moved the Central Vigilance Commission (CVC) to seek a probe and registration of an FIR as well as seizure of relevant documents pertaining to the deal announced “unilaterally” by Prime Minister Narendra Modi in April 2015.

Petitioning Central Vigilance Commissioner K.V. Chowdary on September 24, the Congress urged him to take cognisance of the deal which it claimed was the “biggest defence scam of the century” and register a first information report against those guilty, apart from seizing all documents pertaining to the deal lest they are “destroyed”.