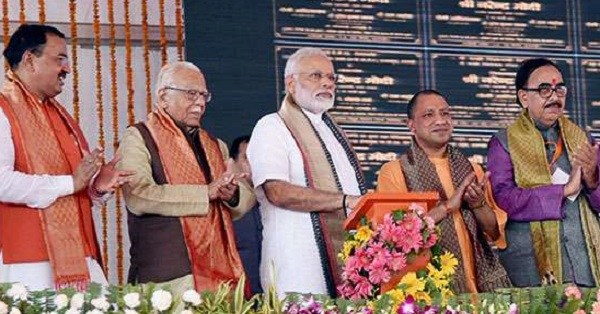 The Prime Minister, Shri Narendra Modi, inaugurated, or laid  the foundation stone of important projects, cumulatively worth over Rs. 900 crore, in Varanasi. Among the projects inaugurated are the Varanasi City Gas Distribution Project, and the Varanasi-Ballia MEMU train. The foundation stone was laid for the PanchkoshiParikrama Marg, and several projects under the Smart City Mission and NamaamiGange. The Prime Minister also laid the Foundation Stone for an International Convention Centre in Varanasi.

Addressing a public meeting on the occasion, the Prime Minister began by congratulating the young athleteHima Das for winning the gold medal in the 400 meters event in the Under 20 World Athletics Championship.

The Prime Minister said that for the last four years, efforts are being made to develop the city of Kashi in accordance with the requirements of the 21st century, keeping its ancient identity intact. He said a New Banaras – a blend of spirituality and modernity – is being developed, for a New India.

He said a glimpse of this new Banaras is now visible all around. He said significant investment has been made in Varanasi over the last four years. He said that the projects worth nearly 1000 crore that were either inaugurated, or for which the Foundation Stone was laid today, is a part of this ongoing exercise.

The Prime Minister elaborated upon his vision of Transfornation through Transportation, and said the Foundation Stone of the Poorvanchal Expressway at Azamgarh today was part of the same exercise.

The Prime Minister said that Varanasi is emerging as a centre for medical science in the region. He said BHU will work with AIIMS to develop a world class health institute.

The Prime Minister spoke of initiatives taken for better connectivity in Varanasi and the region. He said Kashi is emerging as an important international tourist destination. In this context he mentioned the International Convention Centre, the Foundation Stone for which was laid today. He thanked the Prime Minister of Japan, Mr. Shinzo Abe, for this gift from Japan to the people of Varanasi. He appreciated the initiatives taken by the people and the State Government of Uttar Pradesh for tourism, and under the Swachh Bharat Abhiyan.

The Prime Minister mentioned the poor condition of roads and other infrastructure in Varanasi, four years ago. He said the waste of the city was going unchecked into the River Ganga. Today, he said, by contrast, efforts are underway to clean the Ganga from Gangotri till the ocean. He spoke of the various projects for sewage treatment. He said the fruits of all these efforts would become apparent in the future. He asserted that work is in full swing for an Integrated Command and Control Centre, that would make Varanasi a Smart City. He said the Smart City Initiative is not just a mission to improve infrastructure in cities, but also a mission to give India a new identity. He complimented the State Government for its Industrial Policy, and investment climate, and said the results of this have started to become evident. He mentioned the mobile manufacturing unit of Samsung, inaugurated recently in Noida. He said mobile manufacturing units are creating lakhs of jobs.

Speaking of the city gas distribution project, the Prime Minister said that 8000 houses in Varanasi have already received piped cooking gas connections. He also mentioned the use of CNG as fuel for public transport in the city.

The Prime Minister recalled how the city of Varanasi had welcomed Japanese Prime Minister Shinzo Abe, and French President Emmanuel Macron. He said another occasion for Varanasi to showcase its hospitality was coming soon, with the PravasiBharatiya Divas in January 2019.