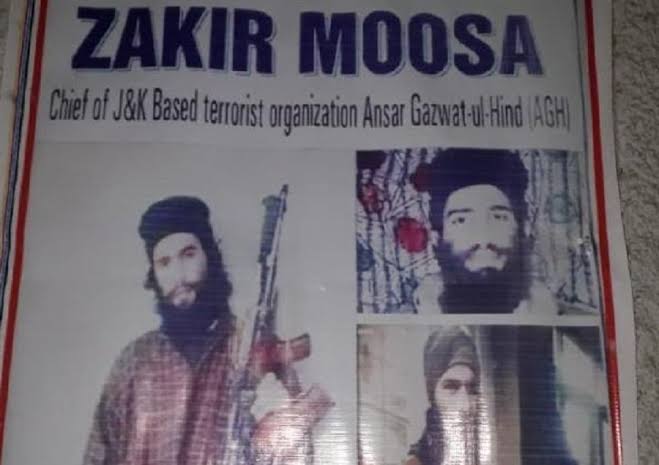 With Zakir Musa’s killing, security forces have recorded an extremely important kill in the battle against Islamic fundamentalism in the Valley, in the main south Kashmir where the jungles are now being used to train local youth. Musa, a byproduct of generation X, is a neophyte who grew up in turbulence and turmoil and experienced the so-called ‘azadi’ struggle first-hand, but chose the path of ‘sharia’ instead, brainwashed as he was by Wahabi Salafism indoctrination.

Zakir Rashid Bhat, 25, was trapped by security forces in a three-storey house in southern Kashmir late on Thursday and to flush him out, the house was set ablaze during the operation. Bhat or Musa, a former commander of the Hizbul Mujahideen, the largest of the militant groups fighting against Indian rule in Kashmir, founded his own group and declared its association with al Qaeda in 2017.

Caught between two lovers, one of whom snitched to the intel network which moved with alacrity to pin Musa down and kill him. Apparently poster boy Burhan Wani and Samir Tiger too died because their ex-lovers squealed to police snitches and gave them the exact location of the prey. This is a major downside and new IG Kashmir S.P. Pani is meticulously using his intel network to nail these terrorists one by one.

The most dangerous element is that stone pelters are seamlessly migrating to weaponised militancy. The age group of 12-20 is most

vulnerable to this phenomenon. The next big thing after Musa’s extermination is Riyaz Naikoo.

Riyaz Naikoo, 33, carries a reward of Rs 12 lakh on his head. He now replaces Zakir Musa as the most wanted militant commander in the Valley after Musa’s death. Although he is not affiliated to the Al Qaeda as Musa was, Naikoo is the most senior commander of the pro-Pakistan Hizbul Mujahideen or HM, to which Musa too belonged until he got fed up of the group and dumped it.

Categorised as “A++” level militant, intelligence agencies believe Naikoo is more of a “liberal militant commander” as compared to Musa who settled for nothing except the struggle to establish an Islamic state in Kashmir. Kidnappings of families of policemen attributed to Naikoo forced the police brass during 2016-17 to tell policemen not to visit their families in south Kashmir areas without security and permission from seniors.

This threat become more real by circulation of Naikoo’s threatening video clips on social media.Naikoo’s appearances at funerals of slain militants where he would offer gun salutes became a major problem for the security forces. He also used these funerals as a delta for recruitment.

But the local terror network has its hands full with 41-year-old IG Kashmir S.P. Pani who is chasing the quarry relentlessly notching up kill after kill. Odisha IPS officer Swayam Prakash Pani was appointed the Inspector General (IG) of Police, Kashmir range, making him the youngest officer to hold the post last February. A 2000 batch IPS officer of Jammu Kashmir cadre, Pani (41) was serving as the Deputy Inspector General (DIG) of Police, South Kashmir Range.

Pani, a ruthless hunter who relies on intel to manage anti-terrorist operations, served as the Deputy Inspector General (DIG) of Police, South Kashmir Range. During his tenure as DIG, south Kashmir, many militant commanders were killed in encounters. While focusing on anti-militancy operations, Pani also relentlessly worked to bring misguided youths to the mainstream and succeeded in bringing seven youths back to normal life. Pani also ensured securing arrests of militants from encounter sites.

As many as four militants were arrested from encounter sites during his tenure as DIG.

There are now two generations in Kashmir Valley which have openly espoused the cause of ‘azadi,’ for the construct of this war against India is now 40 years old. Kashmiris have over these 40 years forgotten they are welded to the sovereign through the instrument of

accession. Kashmiri nationalism has given way to Islamic radicalisation and even the Hurriyat hawks are on the margins.

Even since 2010 despite sporadic attempts to raise Cain in the Valley, Kashmiris had more or less got used to peace realising that ‘Hindustan Chodega nahin’ or Pakistan was no longer an option.

The tipping point came in January 2013 when Afzal Guru was hanged and while the Omar Abdullah administration ring-fenced the Valley from expected trouble, this underling credo of faux peace was shattered and even exacerbated by the extreme Right of India BJP going into a coalition with the extreme Right of Kashmir soft separatist PDP.

Almost immediately Syed Ali Shah Geelani’s heir apparent the dreaded ideologue Masrat Alam was freed and all hell broke loose. The Ahl-e-Hadith is arguably the closest to the Wahabism, the deadliest strain. With the unidirectional rise of Jamiat Ahl-e- Hadees or Hadith, J&K became one of the talking points among the deep state in Delhi.

As many as 1,000 mosques sprouted out of nowhere in south Kashmir and as many as 2000 all over Kashmir. Cultural Islam was being systematically replaced by religious Islam funneled by Saudi money and a process of Arabisation had begun in right earnest. In parallel, madrasas opened up with clerics from UP and Bihar selling the idea of religious Islam.

Remember that radicalisation ends at religion and a combination of personal and social reasons, perceived sense of grievance, hurt and anger began to chip away at the sufi fabric of Kashmiriyat.

This lead to a persecution complex that they were wronged due to their identity resulting in an aspirational deficit. This flawed mind percept with a strong bent towards theological Islam. They are now aligning their local Islamic aspiration with global Islamic aspirations and ambition.

The re-emergence of local subscription is what is most worrying for the Indian security apparatus. ISI C Wing too has realised that the jihad complex which it has nurtured inside Pakistan to use to foment terror in the Valley may well see a change in strategy for local youth have fallen prey to Islamic ideology which goes beyond the call for azadi. The establishment of ‘sharia’ appears to be the next step.