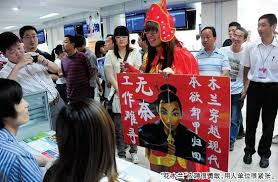 The municipal government of Beijing has banned gender discrimination in company hiring, aiming to boost career opportunities for women, authorities reported on Thursday.

In a document published by the Beijing Bureau of Human Resources and Social Security, the authorities said that gender requirements should not be included in any recruitment notices or interviews, Efe news reported.

It is also prohibited to ask female candidates about their marital or fertility status during interviews, and pregnancy tests cannot be included in pre-employment health check-ups.

“While the employment status of Chinese women is generally good, with the female participation rate among the highest in the world, they still face some difficulties in finding a job, especially persistent sex discrimination in hiring,” the document said.

The licenses of human resources companies to operate in Beijing could be revoked in the case of “serious offences”, according to the document.

A 2017 survey by HR company Zhaopin revealed that more than 80 per cent of working women in China thought gender discrimination existed in their jobs, while 70 per cent admitted experiencing intimidation from male bosses.

Although the Chinese government has tried to show women as the driving force of the economy, in reality gender equality remains a distant dream in the Asian country, with many women still confined to houses and female candidates kept out of top management and political positions.

More From: Gender and Exclusion