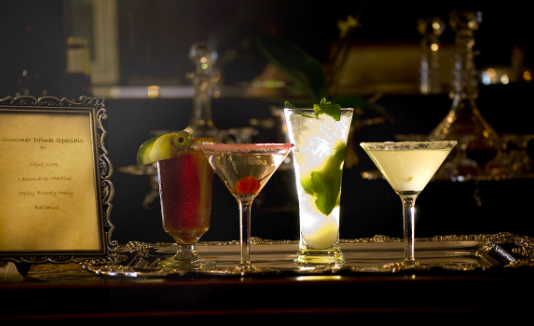 Sharaab and filmmakers seem to share an unbreakable partnership. There may have been many reasons why the two got bound together and kept company with each other all the way.

Can”t say when and how that happened. But, most of the stories I heard while growing up were about film celebrities sacrificing their lives in preference to alcohol.

In the absence of any distractions, I think, the people who worked on films, gathered and relieved their day”s tensions spending evenings cheering with each other.Those were not the days one could drink with elders of the family or even drink at home.

But, in most cases, alcohol invaded a film aspirant”s life much before he made it to films. Later, when successful, it was used to celebrate. There was a time in the industry when the non-drinkers found it tough to communicate. Or, be a part of the circuit.

So, the sequence of events in the film industry went something like this. A film was launched with, what was called, a mahurat or a grand mahurat in the case of a big star cast film. This mahurat was a typical performing of a Pooja with distribution of sweets, usually laddoos, to the guests gracing the occasion. The ritual was followed by all filmmakers, Hindu, Muslim and Sikh, alike. It was in keeping with the sentiments of the cast and the crew of the film.

The mahurat formality done, the real celebration started in the evening. The venue would be a five-star hotel and the magic words on the invite were: To celebrate the successful launching of .. Over cocktails and dinner! And, the birds of a feather flocked together. Such jaunts were aimed at the media, cast and crew. They sort of created a bonding.

The fact was a lot of people attended a film mahurat, the real event was the cocktails and dinner that were looked forward to. There was an old adage that India mei doodh ki nadiya behti thi. In a film industry function, it was Daru ki nadiya, literally. The supply never ran out. And, if it did, the party was certified by the media as a flop party!

A cocktail party excuse was found at every opportunity, be it a film launch, a film celebrating 100 days, 25 weeks and so on.

The story sittings — again, held in some hotel room so that writer and director worked peacefully — were usually drinking binges. If a distributor arrived from other city, it was a custom for the producer to entertain him with drinks.

Most of the filmstars took to alcohol before they started their careers. When one saw references to aunty ka adda or Pascal ka adda in 1970s films, these were real-life projections and referred to real-life hooch joints of suburban Mumbai. Pascal”s was a joint near the National College in Bandra; aunties were all over the suburbs. A lot of actors have confessed to being patron of these hooch joints in their chats with the media over a period.

The only difference was that, when some of these strugglers became stars, they changed to Scotch but kept grumbling about the Scotch being no match for hooch!

Talking of Scotch, every filmmaker worth his name, believed in serving only Scotch at his party. There were suppliers of this product and there was a community which was said to specialise in making Scotch out of the best of Indian whiskies. The belief in those days was this: Mumbai consumes more Scotch per year than Scotland produces!

Nobody liked to drink alone. Especially the stars. While most of the stars had their session with a close coterie, there were a few which liked crowds, called chamchas or the hangers on, in those days. And, when it came to such sycophants hanging around a star, I think, Rajesh Khanna stole a march over all his contemporaries.

In the times past, films were shot over a couple of years, in instalments of a few days at a time and a long hiatus followed. It was all done on borrowed monies. Yet, no such shooting schedule ended without ”schedule completion celebrations” on the last evening. I have been a party to a few of them. If the director and the stars got along well, usually, the day”s shooting culminated in a drinking session at the star”s house.

Throwing party was a norm with both filmmakers and music companies. The latter did that on the release of an album as well as to celebrate its success. That assured media turnout. Now, no such parties are thrown. Events are held during the day and the target media is mostly electronic. The media folk have to run from event to event and also meet deadlines. That has put paid to the cocktails era.

Most of the aspirants who alighted from the Frontier Mail, like Dharmendra, had nothing to go back to if they failed to make it in Mumbai. There was only films where one could try his luck. No TV or other avenues like we have today. This lot had no family sending bank transfers. On the days when things did not work out, it ended at Pascal”s or Aunty”s. Again, it has been reflected in a lot of films of that era.

Alcohol addiction proved fatal, especially when a filmmaker or actor faced a bad patch as one got into frustration and self-pity, drowning it all in alcohol leading to death. A couple of reputed directors could not avoid drinking while suffering from jaundice, leading to death.

Nobody cared which producers were regulars but what mattered were the actors.

Then came a generation of actors that abhorred the stuff. There was a new triumvirate in Sunny Deol, Anil Kapoor and Jackie Shroff. Sunny and Anil were non-drinkers while Jackie was an undemonstrative drinker. No after drinks stories about him.

There were some who decided to stop drinking. And, that affected their social life. There is the example of the bigtime publicist, Bunny Reuben, who handled media for big banners, from RK Studios to BR Films and many more. Drinking and inviting the media to share it was a norm for his kind of work. But, once he gave up drinking, he gradually started withdrawing from socialising. He stopped attending his own clients” cocktail functions and that began telling on his work.

However, there are also instances where saying goodbye to alcohol helped eminent men turn a new leaf.The two prime examples are Mahesh Bhatt and Javed Akhtar. Both chronic drinkers gave up not only drinking but also smoking one fine day and successfully returned to glory to their respective fields, filmmaking and writing.

The in-between generation of actors, at least some of them, were addicted to mild drugs along with smoking. But, the later generation was reported to be more on high drugs, the sniffing kind. Those who drink among the present lot do it more as a fashion statement and stick to Vodka or Tequila shots. No more hardcore drinkers now.

The liquor will flow again next week during the traditional Diwali cards sessions. There are a few producers and some actors who arrange card playing parties. Diwali card sessions are a practise followed by every generation and, often, some film deals are struck here.

* The current period, known as Pre-Diwali, is considered to be the dullest of the year but the week saw the release of as many as 11 Hindi films! All to a disastrous outcome. Most of these don”t have the power to draw footfalls. Releasing such films only adds to the losses as let alone the production costs, which is gone anyway but will entail distribution costs in addition.

Besides the dull period, even the titles of most of these films are enough to put off a moviegoer.

* “War” ruled in its first week with highly enhanced admission rates and braved the dull period. However, the going slowed down as the days progressed. The film could add Rs 46.5 crore (plus Rs 3 crore from Tamil and Telugu versions) in its second week according to YRF. This takes the film”s two week total to Rs 275 crore.

(Vinod Mirani is a veteran film writer and box office analyst. The views expressed are personal.)