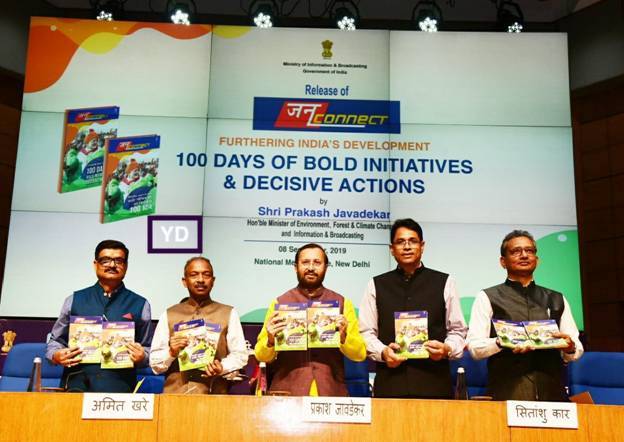 Ahead of the 100 days of Modi 2.0 administration, The Union Government of India has taken various landmark and historic decisions at an unprecedented scale. As per the, Union Minister Prakash Javadekar released a booklet titled, “Jan Connect” and inaugurated exhibition on Furthering India’s Development – 100 days of “Bold Initiatives and Decisive Actions” by the government. In the wake of historic Chandrayaan 2 mission, The Minister also lauded the encouragement & sensitivity of PM Narendra Modi administration towards the dedicated scientists at Indian Space Research Organisation (ISRO) and boost to the scientific community at large scale, The Information and Broadcasting Minister remarked on Sep 08.

In a global arena, The booklet attributed the global influence of Modi 2.0 administration; Work wins Global Praise, Increasing Global Stature of India, India Leading the Global Narrative, PM Modi at the G20 – Wide Outreach, Futuristic Outcomes, Neighbourhood First Policy, Strengthening our ties with Extended Neighbourhood, India’s expanding Sphere of Influence in the World, G7 Summit, Strengthening the ties with Russia, Empowering North-East, Media Coverage, and Citizen Speak etc is the global success of this government, The document suggested. In a historic step removes special provisions in valley, It is considered as a Path breaking decision – Bringing J&K to mainstream.

Thus, The Article 370 & Article 35-A were abrogated and the union government managed to pass a law for the reorganisation of Jammu and Kashmir state. In this regard, All Provisions of the constitution of India to now apply on J&K; Bringing J&K at par with other state & UTs, Boost to the local economy and job creation by allowing private Investment, Batterment of socio-economic Infrastructure in the UTs, Laws pertaining to education, empowerment of SCs, STs, Minorities and other to be applicable to J&K and Provisions of 10% quota to economically weaker sections of society to apply in Jammu, Kashmir, Ladakh in Jobs and educational Institutions.

Moreover, Examining concerns raised on India’s GDP growth rate, The Union Minister also stressed that while the slowdown of the economy is cyclical, the fundamentals of Indian economy are strong; with surge in foreign investment and domestic demand, GDP growth rate will soon rise.. In this regard, The other historic decisions were; merger of public sector banks (PSBs), additional credit expansion through PSBs, corporate law reforms, major GST and Income Tax, abolishment of Triple Talaq, Amendment to POCSO Act, pay parity for women, housing for all and extending PM-Kisan to all 6.37 crore farmers is the major step of government, The Minister explained.. Recently, The first stimulus package was announced that included reduction of taxes, improvement of liquidity in the banking sector (formal and shadow), increased government spending on auto and infrastructure, and accelerated refunds of GST.

In a major outreach step to cycle the issues of the ‘farming sector’, which cost the ruling Bharatiya Janata Party (BJP) three state elections last December, The PM extended the scope of the PM-Kisan scheme, to include all the 145 million farmers across the Nation, besides announcing a ‘₹3,000 monthly pension scheme’ for 125 million small and marginal farmers.. However, The union government is gearing up for the upcoming state assembly polls with a particular target on sugarcane farmers in states like Haryana and Maharashtra. Hence, The ‘Jan Connect’ comes in the backdrop of a litmus test for Modi’s 2.0 administration as it begins to restore peace in the region (Valley) against the backdrop of unrest in the J&K.

Recently, Central Statistics Office (CSO) released India’s economic growth datas for the April-June quarter (‘Q’) of financial year 2020 on August 30. The economic growth of India slumped for the fifth straight ‘Q’ (April-June) to an over six-year low of 5% in the three months ended June as consumer demand and private investment were slowed amid deteriorating international environment. Examining this, It has been on account of both ‘exogenous’ and ‘endogenous’ factors. The union government is quite alive to the situation especially global headwinds arising out of deceleration in the developed economic and Sino-American trade conflict which has contributed to the slowdown. After agriculture, real estate-construction is the second-largest employer and also has a huge backward and forward linkages with other sectors. So reviving such sectors would be crucial both from the ‘investment’ as well as ‘consumption’ point of view. While the rating agency believed that there is no quick-fix solution to the downturn which has been in the making for the past few years.

Although, The ‘Jan Connect’ contains a compendium of key decisions of the Modi administration in 100 days. The booklet is divided in many sections, for instance; “Jammu, Kashmir and Ladakh – Crown of India”, “Sweeping Economic Reforms – Towards $5 Trillion Economy”, Ease of Doing Business, Ensuring Social Justice to all Sections of Society, Empowerment of all, Towards Doubling Farmers’ Income, Towards Commanding, Water Security, Good Governance, First Government Decision – Dedicated to those who protect India, Focus on Higher Education Infrastructure, On the edge of Discovery, Security and Defence Sectors is some of the major key indicators.

Despite all of this, Achieving the goal of making India $5 trillion economy; Transparency in Tax system; Jal Shakti Abhiyaan; Har Ghar Bijli Yojna; Ujjwala scheme for gas connections; Ayushman Bharat; social sector protection to unorganized sector workers and small traders; financial assistance to farmers – the largest of its kind in the world; Jan Bhagidari movements, electronic mobility (Union Government on India’s ambitious plan for a transition to electric mobility), Fit India and campaign against ending menace of single use plastics; measure of good governance; productive of Parliamentary Session; action against corrupt government officers among others are the landmark decisions taken by the government of India. Repositioning PSBs for $5 trillion economy and PSBs to boost India’s GDP growth, Yet it needs wide-range of Economic Reforms.