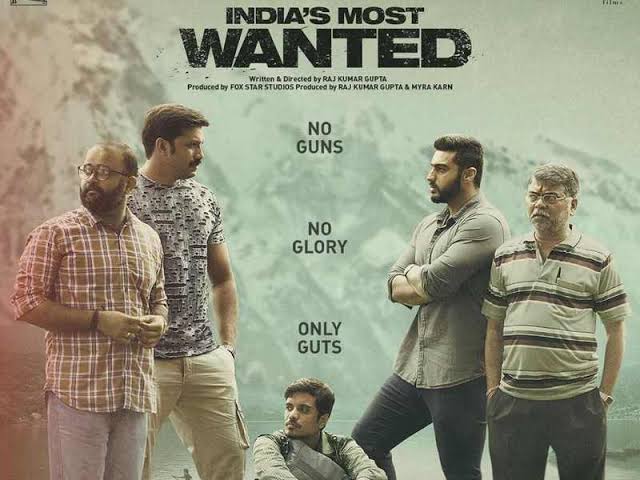 In  a milieu of  bustling  violence, terrorism  has been reduced  to  a formula in our cinema. A pretext to show larger-than-life villains with heroes to match.

But  what  about those  real terrorists and those unsung heroes who have apprehended  dreaded terrorists  not for fame recognition  or,  God forbid, money.  But simply because  to them ,that seems  the right thing to do.

India’s Most Wanted is  that rare   film  on counter-terrorism which  seems  to  show  no inclination  to overplay its cards,  Rajkumar  Gupta’s  target here  is  to not show  his hero  indulging  in scene-stealing  heroics(the kind Akshay Kumar would be seen  doing),  but to  put the protagonist , a docile humble  unostentatious man Prabhat who  never smiles  because…well, what  is there  to smile about? Have  you seen the  number of bomb blasts  that have occurred in the last  2 decades?

Prabhat believes nabbing India’s most  dangerous  terrorist is  not a negotiable job.He  just has to do it.And if he get  no help from official agencies then he  will do it  on his own with a ragged quartet  of like-minded government  officials,  so nondescript they  could pass off as vegetable  vendors on a crowded  street.

As played  by  Arjun Kapoor,  Pravin Singh Sisodia,Aasif Khan, Devendra Mishra and  Prasanth  Philip Alexander  this  is  the most unlikely  army  of heroes you will  ever encounter in  mainstream cinema. There is no effort to portray them as  anything except  what they really are: penniless  counter-terrorists driven only by a passion to make  this  world  a better  place for  peace-loving citizens.

Barring Arjun Kapoor,  most of the faces used in this excruciatingly authentic cat-and-mouse game are  the kind that  don’t act. They  seem to merge  into the milieu with a fluency that  could be  perceived as  the opposite  of grace.  But then who said anything about acts  of terrorism  and  counter-terrorism being graceful?

India’s Most Wanted   is  a  slow-burner  of a film. It derives immense  power out  of its writer-director’s   proclivity to keep the physicality  of the actors as  authentic as possible. The  emotional  quotient simply follows. The  narrative begins in Patna and then  moves with  noisy fluidity  into Nepal where  the  chase to hunt down  the  primeval terrorist  is chronicled in graphic detail, one step at  a time. Please be  patient.

While Arjun Kapoor immerses himself in  looking and feeling like a Bihari terror-annihilator ( he had played Bihariearlier  in Two States) most the actors don’t even need to  try. It’s a no-win circumstance  for these  unconditional  heroes. No  guns, no  back-up. Only a junoon to  get the most dreaded terrorist.It can’t get any more basic.

The  shoot-out at the end  is  so convincingly shot  it feels like  documentary footage.Quickly before  the film lapsed  into  a show of  realistic espionage ,   Rajkumar Gupta  gives us 20 minutes of heartstopping climactic action.

The  buildup is slow and steady. And  the  culmination is overpowering in its  fluency.

This  is a film that  is in no hurry to get  to the  end.Gupta  knows we are living in  a dangerous world where violence is  a  given. He treads  with empathy and  warmth  into this world.   The climactic   payoff is not  our  reward  for watching the  film so intently. It is the fate  of unsung  heroes  to  indulge in their  heroics when  no one  is watching.

This film is shot as though it  didn’t know audiences  would watch it. Instinctive and spontaneous   it is game-changer for  its makers, and  for us too.