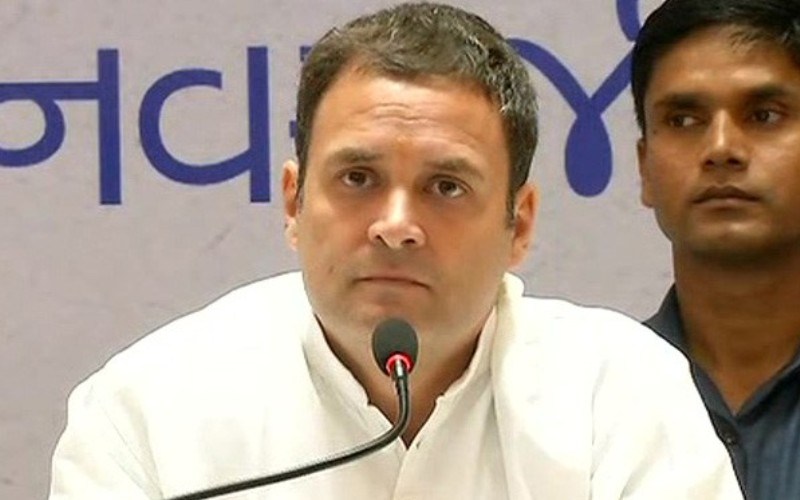 Congress President Rahul Gandhi on Friday said the Narendra Modi government has a sense of “monopoly” over everything it deals with and does not believe in having any form of conversation. Interacting with the audience at the Hindustan Times Leadership Summit here, Gandhi said his attempts at making conversation with the government have always been shunned.

Had these conversations not “snubbed at” and taken place, the GST (Goods and Services Tax) could have been better implemented and the situation in Jammu and Kashmir might not deteriorated. “The people in charge are convinced that they have a monopoly on knowledge. They are convinced that they are the only ones who understand. That no one in this country understands anything about India or the dreams of its people except them. What is a country if there isn’t a conversation,” he said.

Lambasting the Modi regime for its “ridiculous” demonetisation and GST move that broke the backbone of traders, Gandhi said the nation cannot be run in the absence of conversation with the stakeholders. “This dispensation believes knowledge lies with them, understanding lies with them alone. They don’t believe that they need to have a conversation. “There needs to be a conversation that provides the vision going forward. And that is exactly what is missing,” Gandhi said.

Regarding his failed attempts at holding a dialogue with Union Finance Minister Arun Jaitley on the issue of Kashmir, Gandhi said: “Many a times I have attempted conversation, but have been snubbed. “Once Jaitley came to see me and I started a conversation on Kashmir, this was before the violence started up. I said we have a serious problem coming up in the Valley and his answer was ‘No, there isn’t’,” said Gandhi.

“It was pretty clear that politics which was taking place, the alliance between the PDP and BJP was going to set the field on fire. But no one was ready to listen, and the damage since has been tremendous,” he said. Observing that the GST under the Congress-led United Progressive Alliance (UPA) regime was simpler and people-friendly, Gandhi accused the Modi dispensation of not listening to its views while implementing the new tax regime in July 2017.

“If that conversation had taken place, we would have got a better GST,” said Gandhi adding that nobody was happy with the new tax regime and it was killing both the industry and economy. He also said that Aadhaar under the UPA was a means to simplify people’s life as against the unique identification scheme under the Modi regime which has been turned into a sort of “surveillance” tool.

“The difference between them (the Bharatiya Janata Party) and us is that we trust people, we believe knowledge lies with eveyone,” he said. Gandhi also wondered why his visits to religious places “infuriated” the BJP. “My temple visits have nothing to do with Hindutva. I can’t understand why I can’t go to a temple or a church or a gurudwara. BJP thinks only they can go to temples. “They have a sense of monopoly in everything they deal with, monopoly on all institutions, on who goes to temples — that is their nature,” added Gandhi.