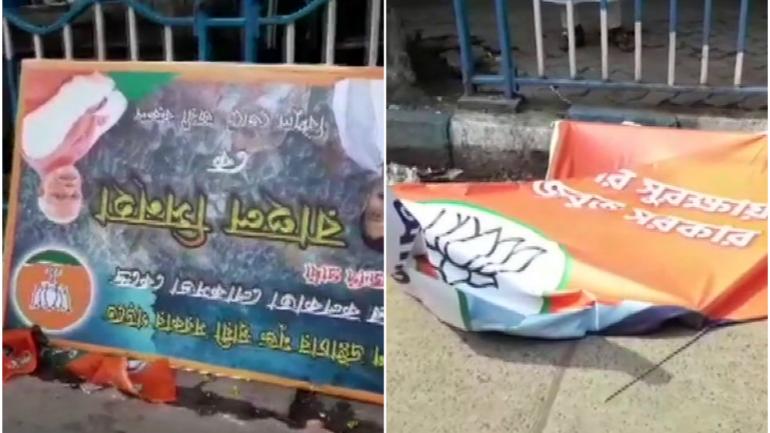 Clashes erupt during BJP president Amit Shah’s mega road show in Kolkata on Tuesday when a large group of youths gathered in the College Street area in front of the main gate of the Calcutta University.

West Bengal Chief Minister Mamata Banerjee said that perhaps one person has died in the clash and she is inquiring into it. The road show started from Esplanade in central Kolkata and concluded at Swami Vivekananda’s residence in North Kolkata.

While the protesters wanted to show black flags to Shah another large group of BJP and ABVP supporters gathered on the opposite side of the roads trying to stop the rival group from showing black flags. Water bottles and stones were hurled by BJP and ABVP members at the protesters in which one person got injured as they shouted “Amit Shah go back” slogans. The youths allegedly belonging to the Trinamool Chhatra Parishad (TMCP) the students’ wing of the Trinamool Congress

Things almost went out of control when a section of BJP workers broke through the police barricade in front of the Calcutta University gate and charged at the protesters. Scuffle broke out between the two sides. Police personnel were seen struggling to control the crowd.   Soon after another clash erupted when stones were allegedly pelted at the BJP rally from inside the compound of nearby Vidyasagar College. Motorcycles were set on fire during the clash in front of the college gate.

Police resorted to baton charge to disperse the crowd. The roadshow had no lack of grand arrangements. Large sections of the roads in Central Kolkata from where the roadshow passed were almost covered with saffron flower petals and about 10,000 kgs of flowers were brought from the adjoining district for the event.  Decorated tableaux with artists performing traditional dance forms of Bengal on top of them were used in the procession. Several loudspeakers blaring out slogans ‘fir ekbar Modi sarkar’ and ‘Jai Shree Ram’ were placed alongside the route of the procession. Several people dressed as Lord Ram and Hanuman took part in the road show.  During the rally, Shah said that BJP will definitely get more than 23 seats in West Bengal.

As for Chief Minister Mamata Banerjee’s regular attacks on him and Prime Minister Narendra Modi, the BJP president said “Didi can resort to as much treachery she wants to. But even she  knows that the people’s mandate will go against her.”

As for the alleged attacks on BJP workers by TMC cadres, Shah said that “ if BJP is able to come to power in West Bengal they will never resort to such atrocities.” He also advised the West Bengal Chief Minister not get so angry.