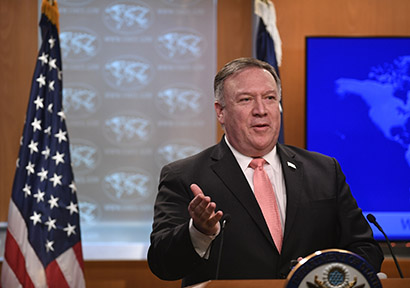 US Secretary of State Mike Pompeo on Wednesday said that the US will not rely on other sides regarding the investigation of the death of Saudi journalist Jamal Khashoggi, as the Turkish side revealed details of his death on the same day.

Speaking in an interview with The Brian Kilmeade Show via teleconference, Pompeo said that the murder of Jamal Khashoggi in the consulate in Turkey violated “the norms of international law”, reports Xinhua news agency.

“What we’ve asked the Saudis to do and the Turks to do, the place which the murder took place, is to help us continue to develop the facts, that there are still many unanswered questions about precisely how this came to be,” he said.

However, he added that “we are working diligently, our team, to get the facts, the facts that the Americans can learn. We won’t rely on others; we’ll take their information, we’ll make sure and develop our fact pattern.”

The US top diplomat also noted that US military and commercial ties with the kingdom are “very important,” which should be kept in mind “as we continue to ensure that accountability is had for all those who were involved in committing this murder.”

“The Saudis… understand that they’ve got to get these facts out, and that time is not on their side in doing so,” Pompeo added.

Also on Wednesday, the Istanbul Chief Public Prosecutor’s Office said that Khashoggi was choked to death immediately after entering the Saudi Arabian consulate in the city and his body was dismembered after he was strangled to death.

The prosecutor reiterated a call for the extradition of the suspects arrested in Saudi Arabia, saying “Turkish courts have jurisdiction over the case in line with Turkish law and principles of international law, provided that Jamal Khashoggi was killed in Turkey.”

Khashoggi, journalist and columnist for The Washington Post, has been missing since he entered the Saudi consulate in Istanbul on October 2.

After releasing the results of its initial investigations, the Saudi Public Prosecution announced that 18 people were arrested over their alleged connections to the killing.

US President Donald Trump on October 23 denounced Saudi handling of the death of Khashoggi, calling it the “worst cover-up ever” and “a total fiasco.”

Pompeo has also announced that the US is revoking visas of 21 Saudi officials who were suspected of involvement in the case, in the first concrete step of punishment taken by the Trump administration after the disclosure of Khashoggi’s death.