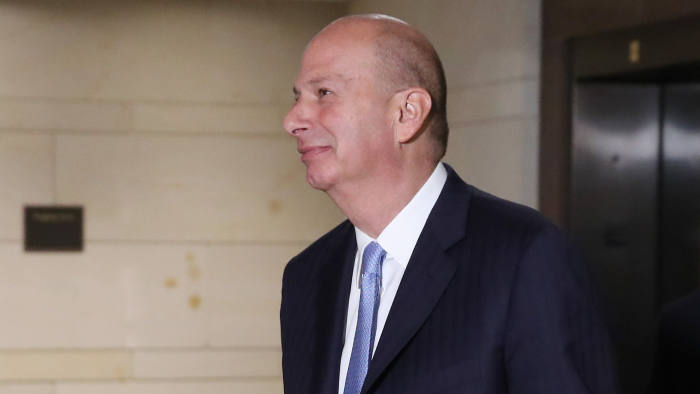 Gordon Sondland, the US envoy to the EU, has made an amendment to his earlier Congressional testimony, admitting that the US President Donald Trump offered Ukraine a quid pro quo to investigate political rival Joe Biden over alleged corruption.

In a document released by Democratic leaders in the House of Representatives on Tuesday, Sondland validated the main thesis of the congressional investigation seeking to determine whether or not to impeach President Donald Trump, namely that his administration withheld congressionally-approved security aid to Ukraine for partisan ends, Efe news reported.

“I said that resumption of US aid would likely not occur until Ukraine provided the public anti-corruption statement that we had been discussing for many weeks,” wrote Sondland in an addendum to his earlier testimony before the House committees investigating Trump.

Sondland said that he communicated that message to Andriy Yermak, an advisor to Ukrainian President Volodymur Zelensky during a meeting in Warsaw on September 1.

The Congressional committees investigating the Ukraine case on Tuesday published a 350-plus-page transcript of Sondland”s original closed-door testimony on October 17 and the envoy”s three-page addition to that testimony, which he sent to lawmakers on Monday.

In that additional statement, Sondland confirmed that the testimony of other witnesses had “refreshed my recollection about conversations involving the suspension of US aid” in which he participated in September.

Although Sondland said that he “still” does not know why the aid was delayed or who delayed it, he “presumed” that releasing it was contingent on a public statement, which he said he later learned would have to come from Zelensky himself.

Sondland thus referred to Trump”s request, made in a telephone call to Zelensky in July, that Ukraine investigate former Vice President Biden and the business dealings of his son Hunter with the Ukrainian gas company Burisma.

After Sondland”s first appearance before lawmakers in October, several subsequent witnesses said that the ambassador to the EU had admitted to them that the Ukraine aid was conditioned to Kyiv”s fulfilling partisan objectives.

With the admission of that point by Sondland, “the President”s scheme comes into clearer focus,” the Democratic heads of the three committees investigating Trump said in a joint statement.

The committees also released the transcript of the testimony by US special envoy to Ukraine Kurt Volker, who along with Sondland and US Energy Secretary Rick Perry, was one of the so-called “Three Amigos” tasked with carrying out US policy toward the former Soviet republic.

Trump tasked those three men with coordinating US policy toward Ukraine together with his personal attorney, Rudy Giuliani, who insisted that the Ukrainian government must investigate the Democrats, and the four maintained a “parallel channel” for Ukraine contacts that excluded diplomats like former US Ambassador to Ukraine Marie Yovanovitch.