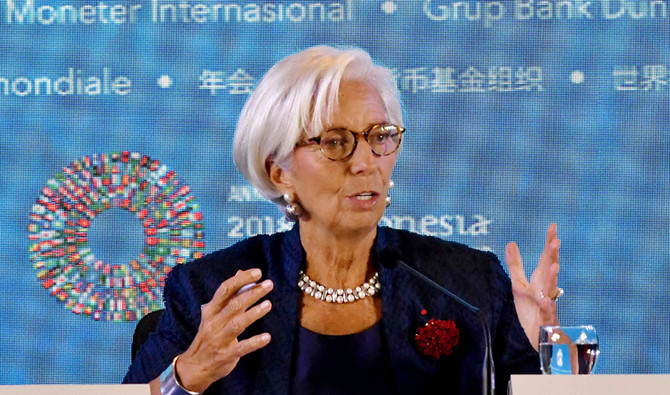 International Monetary Fund (IMF) Managing Director Christine Lagarde on Thursday said that a bailout deal with Pakistan would require “absolute transparency” of its debts, many of which come from China’s landmark Belt and Road Initiative. “In whatever work we do, we need to have a complete understanding and absolute transparency about the nature, size, terms of the debt that is bearing on a particular country,” Lagarde said at the IMF and World Bank Group annual meetings in Bali, Indonesia.

She added the IMF needed to understand the extent of the position of the debt, including lending from sovereign governments and from state-owned enterprises, so that officials could determine a country’s debt sustainability, Efe news reported. Her statements indicated that Pakistan could be forced to disclose the full extent and terms of Chinese lending it received in recent years as part of its participation in the Belt and Road Initiative, China’s vast global infrastructure-spending programme.

The Wall Street Journal report by Joshua Zumbrun and Saumya Vaishampayan states that International Monetary Fund Managing Director Christine Lagarde said a bailout deal with Pakistan would require “absolute transparency” of its debts, many of which come from China’s landmark Belt and Road Initiative.

Earlier this week, Pakistan said that it would be seeking a loan from the IMF. The country has a ballooning trade deficit, falling currency and is quickly exhausting its foreign-exchange reserves. Experts say the country needs about $12 billion to cover its imports and meet upcoming debt payments.

Lagarde said she didn’t meet Pakistan’s Finance Minister Asad Umar or received a formal request for IMF assistance yet. But she said that the IMF will meet the Pakistani delegation on Thursday and that the IMF was “available to its entire membership”. Pakistan’s requirement for an IMF loan has already been complicated by its ties to China. It has been the largest recipient of funding under Beijing’s Belt and Road Initiative.

In July, US Secretary of State Mike Pompeo warned that Washington didn’t want to see any IMF lending to Pakistan “go to bail out Chinese bondholders or China itself”. The US has accused China of “debt-trap diplomacy” by lending countries money to pay Chinese companies to build infrastructure that the recipients can’t afford.

Pakistan’s new government of Prime Minister Imran Khan had suggested it might try to avoid working with the IMF, but the recent turbulence in its stock and currency markets left it no choice, officials said. Stepped up disclosure on debts, such as those from China, will be a requirement, Lagarde said, adding that was not only going to apply to Pakistan, but all countries.