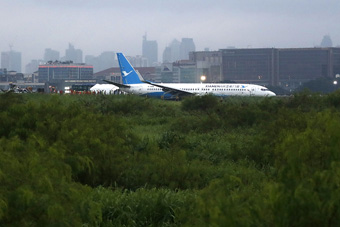 MANILA, Aug. 17, 2018 (Xinhua) -- A Xiamen Airlines Boeing 737-800 plane is seen in the grass safety area after swerving upon landing at the Ninoy Aquino International Airport (NAIA) in Paranaque City, the Philippines, Aug. 17, 2018. A passenger plane from China's Xiamen Airlines skidded off the runway and onto grass when it landed at the Manila international airport early Friday. (Xinhua/Rouelle Umali/IANS)

Hundreds of passengers were stranded at the Manila airport on Friday after a Chinese airline plane crash-landed amid heavy rains, forcing authorities to shut the runway.

The China-based Xiamen Air plane skidded off the runway on Thursday night with 157 passengers and eight crew onboard, reports Efe news.

The passengers and crew travelling on flight MF8667 from Xiamen were evacuated from the plane and were given food and blankets before being transferred to an airport hotel. No injuries have been reported.

Ninoy Aquino International Airport authorities have extended closure of the runway until Friday evening, causing dozens of flights to be cancelled.

“A notice to airlnes has been issued advising them about the closure. Passengers of affected flights are advised to closely coordinate with their airlines for announcements,” the authorities said in a statement.

The Xiamen Air Boeing 737-800 remained on the side of the runway on Friday morning, several hours after the crash.

The airport’s general director, Eddie Monreal, said at a press conference that the plane tried to land twice but after the second attempt the control tower lost contact with it. The specific cause of the incident is still under investigation.