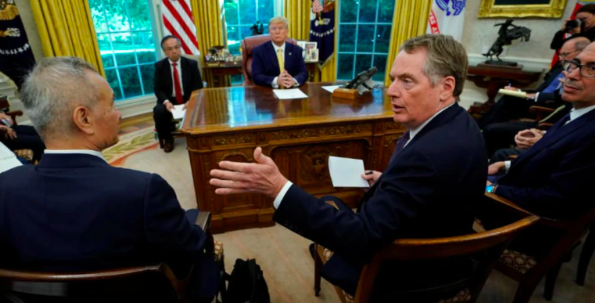 US President Donald Trump has said that the first phase of a trade pact with China could be signed “ahead of schedule”, adding that the aim was to meet his Chinese counterpart Xi Jinping and sign the accord at the APEC summit in Chile next month.

“So we”re about, I would say, a little bit ahead of schedule, maybe a lot ahead of schedule,” the President said, adding that the signing of the document will probably come at the scheduled meeting between him and Xi in Chile, reports Efe news.

In a statement issued last week, US Trade Representative Robert Lighthizer and Treasury Secretary Steven Mnuchin announced that they were close to finalising several sections of the accord after speaking with Chinese Vice Premier Liu He.

Trump and Xi are scheduled to attend the Asia-Pacific Economic Cooperation (APEC) forum on November 16-17 in Santiago, Chile.

The US leader announced at the beginning of October the tentative conclusion of a partial trade pact that allowed the establishment of a truce in his trade war with China, which has been underway for almost a year-and-a-half, simultaneously shelving his plans to hike tariffs on imports from the Asian giant.

Trump described the pact as the first part of a process that could unfold in three phases.

Meanwhile, China promised to increase its purchases of US agricultural products to between $40 billion and $50 billion, a figure that, according to Trump, was “two-and-a-half to three times” greater than what Beijing has bought so far from the US even at the peak of its purchases, totalling some $17 billion.

Neither of the two governments, however, has so far made public any details of the pact, although Trump said that it includes certain measures related to the devaluation of the Chinese currency and the issue of intellectual property but does not deal with the forced transfer of US technology to China, an issue that will be discussed during the “second phase”.

The accord also does not resolve the issue of vetoes on exports affecting China”s Huawei telecommunications firm, something that is being negotiated in a parallel process.

The International Monetary Fund has warned of the global repercussions of the Washington-Beijing trade war and has reduced its growth forecasts for both the US and China for 2019 and 2020.