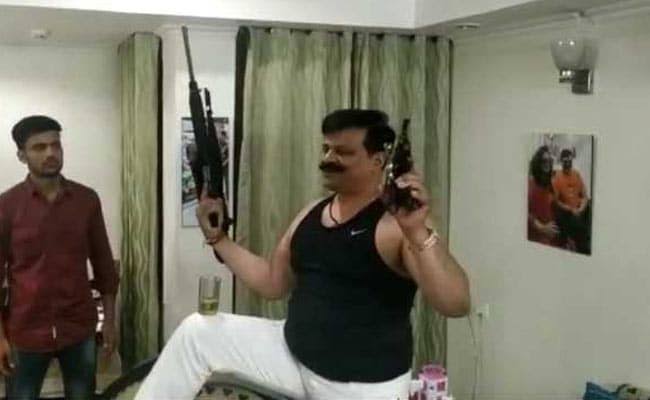 The suspended BJP MLA Kunwar Pranav Singh Champion is at the centre of a raging controversy again after a video has gone viral showing him dancing with pistols and carbine.

Dancing to the tune of the “Gup Chup” song from the blockbuster movie “Karan Arjun”, Champion is seen holding a pistol in his mouth and a carbine in one hand, while there is one more pistol in his other hand. He is even seen allegedly abusing Uttarakhand.

A host of Congress leaders have sought strict action against Champion on the basis of the video.

After being embroiled in various controversies over a long period, the ruling BJP had cracked the whip last month, suspending Champion from the party for three months.

The suspension came after a preliminary report prepared by the state BJP disciplinary committee found Champion guilty of gross indiscipline and also took cognizance of his alleged threats to a journalist.

Last month, another video had gone viral in which Champion, an MLA from the Khanpur seat, was seen threatening an electronic media journalist.

He was also in the news for publicly making fun of the BJP legislator from Jhabreda, Deshraj Karnwal. Champion later also challenged Karnwal to a wrestling match to settle their long-standing dispute. Karnwal however did not take up the challenge.

Champion, who wanted a ticket for his wife for the Lok Sabha polls from Haridwar, had described the then sitting MP from the seat and current Union HRD Minister Ramesh Pokhriyal ”Nishank” as a “migratory bird”.

Champion was among the nine Congress MLAs who had rebelled against Harish Rawat and crossed over to the BJP in 2016. Later all the nine MLAs were disqualified by the Speaker under the anti-defection law.