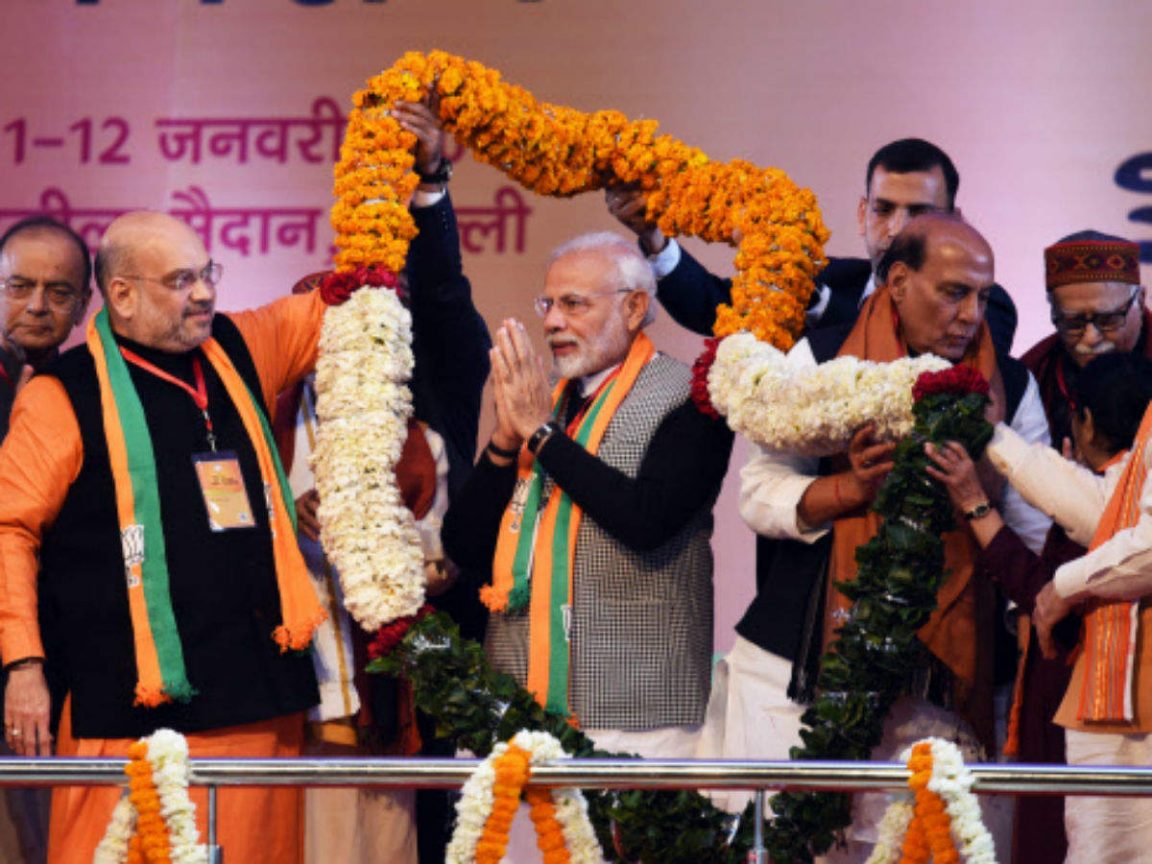 Calling the opposition ‘Mahagathbandhan’ (Grand Alliance) a comical alliance of desperate and opportunistic political parties, the BJP on Saturday said that the people of the country will have a choice in the 2019 general elections either to elect a majboor (helpless) government of a leaderless alliance or a majboot (strong) government under the leadership of Prime Minister Narendra Modi.

The political resolution adopted at the two-day BJP National Convention hailed the Modi government’s economic and foreign policies and its poor-centric welfare measures and said that the biggest change in the last four years was the crackdown on corruption.

In the resolution, the party said that today Indians across the world are feeling far more confident and secure as they know that government is caring for them even while they are far away. The global stature of Modi and the personal warmth he has introduced in the diplomatic discourse has also enhanced the stature of India.

“Choice between stability or instability, between an honest and courageous leader, and a leaderless opportunistic alliance- a ‘majboot’ (strong) government or a ‘majboor’ (helpless) government,” it said.

The resolution also took note of the party’s defeat in the recently concluded Assembly elections in Madhya Pradesh, Chhattisgarh and Rajasthan and said “we note with a mixed feeling”.

Lauding the party workers for putting in a lot of hard work in the elections, it said, “all the BJP state governments have given exemplary record of development and good governance”.

“We shall surely draw the right lessons but surely this will serve as an inspiration for the party workers and cadres to work with renewed vigour in the Lok Sabha elections,” it said. The resolution described the opposition alliance as a “desperate” formation to take on Modi.

“Today a comical alliance known as Mahagathbandhan of desperate, contradictory and opportunistic political formations is being sought to be raised to take on the Prime Minister, the BJP and the NDA,” it said.

“They neither have any programme agenda for the country or for the people, nor any leader but the only glue is the hatred against Modi,” it said, adding that this in many ways also exposes the limitations of the constituents of this opportunistic alliance.

Citing examples of the helpless government between 1990 to 2014, it said, “India of 2019 is not the India of 90s where the longevity of the central government comprising these desperate and opportunistic elements ranged from four months to one year.”

“The choice today is between stability and instability – effective governance or desperate mal-governance, a well-respected leader like Modi being opposed by an opportunistic alliance whose leader is unknown,” it said.

The resolution said that it simply means a choice between a majboor government or a majboot government, where national security, powerful surge of nationalism and growth of India remains the prime focus.

It also hailed the Prime Minister for making the Swachh Bharat Mission a great success. “His government rightly recognised that absence of clean toilets and open defection were the cause of many problems including health hazards,” it said, adding that from 1947 till 2014 nearly 6.5 crore toilets were constructed in the rural areas whereas in the last four and a half years 9.67 crore toilets got constructed.

The party also said that for Muslim women who remained subjugated to archaic and evil practices, the government made the practice of instant triple talaq a criminal offence with penal provisions. The party lauded the Modi government’s programme of Beti Bachao, Beti Padhao.

Taking about social justice and equitable growth it said that the government gave respect to persons with disabilities and increased the reservation of seats for Divyang persons in higher educational institutions to 4 per cent.

“For the welfare of Other Backward Classes, the Modi government gave Constitutional status to the National Commission of Backward Classes,” it said. The party also hailed the Modi government for providing 10 per cent reservation to economically poor people belonging to sections that were not getting the benefits of reservation till now, which also includes the upper castes.