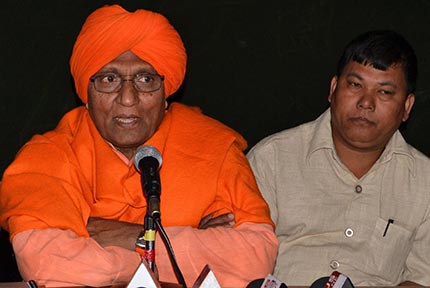 The Supreme Court on Friday dismissed social activist Swami Agnivesh’s plea for payment of minimum wages to workers in the unorganised sector across the country. These wages should be equivalent to what is paid to Group ‘D’ central government employees under the 7th Pay Commission recommendations, the petitioner had pleaded.

Declining to entertain the plea, a bench of Chief Justice Ranjan Gogoi and Justice Sanjay Krishan Kaul asked him to approach the authorities concerned. As Justice Kaul said that “you can go to authority”, Agnivesh said that “authorities are callous”. As the court asked “how can you say minimum wages linked to the 7th Pay Commission for everyone?”, Agnivesh said: “It is a recommendation of the top court in 1992.”

Agnivesh later said that the Supreme Court’s earlier judgment had elevated minimum wage to the level of fundamental rights under Article 23 of the Constitution. He said that Article 23 mandates that no person shall be required or permitted to provide labour or service to another on payment of anything less than the minimum wage.

Agnivesh said that the Supreme Court order taking recourse to Article 141 has the force of law. The petitioner had sought fixation of minimum wages on an hourly basis in proportion to the standard of living and the purchasing power available to the similarly placed workers in the USA, Europe and Japan etc.

Seeking to prohibit the employment of children, the petitioner had contended that the payment of national minimum wage at par with the Centre’s Group D staff would be consistent with the principles laid down by the apex court in its verdict in 1992. The payment of minimum wages will uphold the right to live with dignity under Article 21 of the Constitution, the petitioner said.