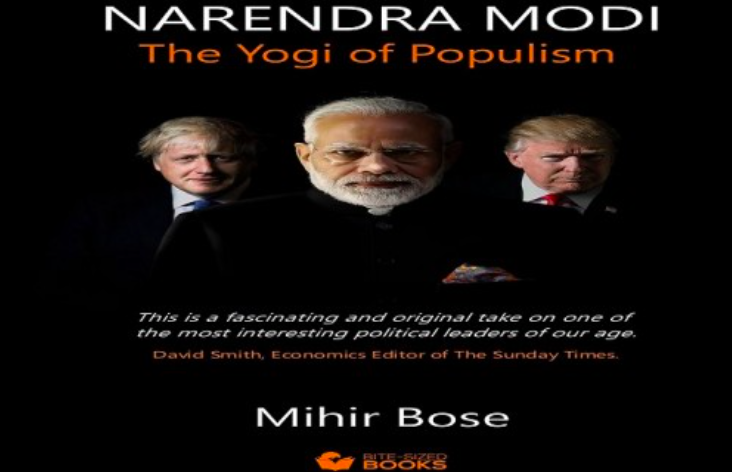 A 62-page monograph on Indian Prime Minister Narendra Modi, originally launched in the UK in February, was unveiled at the Sharjah International Book Fair here for a wider audience.

Written by British-Indian journalist-turned-author Mihir Bose, the book, “Narendra Modi ï¿½ The Yogi of Populism”, has been described as “a fascinating and original take on one of the most interesting political leaders of our age”, by David Smith, Economic Times editor of The Sunday Times.

During an hour-long interactive session on Thursdayat the Sharjah Expo Centre where the 11-day festival is being held until Saturday, the BBC’s first sports editor told how he first got the idea of first writing the book after coming across a graffiti in 1981 in Mumbai’s Kemps Corner that read: “Mrs Gandhi save the Hindus.”

“That was the start of the idea that you have lost your country and that you needed someone to salvage it. (Donald) Trump used it, Boris Johnson has used it and so has (Narendra) Modi,” said Bose while comparing the former US President’s ‘Build the Wall’ narrative with Modi’s ‘Build the Temple’ before elaborating on why he thought the Indian Prime Minister’s playbook for winning elections provided a template for both Trump and Johnson.

“There’s this strong belief that India was once a great nation and that the greatness that was lost because of misadministration by previous government for decades is now being reclaimed by Modi’s government,” Bose said while talking about Modi and contemporary India.

Bose, who started his journalism career with London Broadcasting Corporation (LBC) in the late 1970s, also discussed cricket, its future and how India has come to dominate world cricket, based on his book “The Nine Waves: The Extraordinary Story of Indian Cricket”.

“I would have loved for India to go on and win the ICC World T20 here in UAE but sadly that isn’t to be anymore and I will have to update my book with those disappointing results,” he said while referring to India’s string of poor performances in their group matches that saw them lose to Pakistan, first time in a world cup game, and then New Zealand before crashing out of the tournament.

Talking about the proliferation of T20 and 100-ball cricket, Bose said: “T20 is a nice appetizer but Test cricket to me is the main course. Yet we do need the appetizer and it only enhances overall skills.”