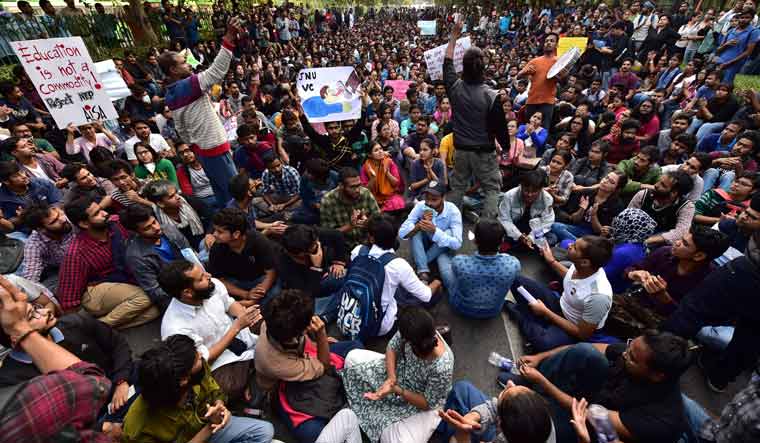 The Jawaharlal Nehru University (JNU) on Tuesday approached the Delhi High Court seeking contempt action against its students and the Delhi Police for allegedly violating a court order against holding a protest within 100 metres of the varsity”s administrative block.

The JNU claimed that the students had grossly violated the August 9, 2017, order of the high court by holding a protest within 100 metres of the administrative block and affecting its day-to-day working, which has been disrupted since October 28.

It said the police also violated the court order by refusing and failing to take action to maintain law and order in the university and removing the blockade around the administrative block.

The petition, filed through the central government”s standing counsel Monika Arora, sought direction to issue contempt notice against the alleged contemnors (students and police) and punish them in accordance with the Contempt of Courts Act for alleged willful disobedience of the court order.

It also sought direction to Delhi Police Commissioner Amulya Patnaik to provide assistance to the JNU in controlling the ongoing and any future contemptuous acts of the students and their leaders and removing them from within 100 metres of the administrative block.

Continuing protests by JNU students against a hostel fee hike have rocked the national capital. On Monday, several parts of the city came to a halt as the students marched towards Parliament.

The students clashed with police as they were stopped during the march. While the students alleged that they were baton-charged by police, top officials of the force denied it.

On Tuesday, the Delhi Police registered two FIRs in connection with the students” protest.

According to police, nearly 30 police personnel and 15 students were injured in the eight-hour protest on Monday.