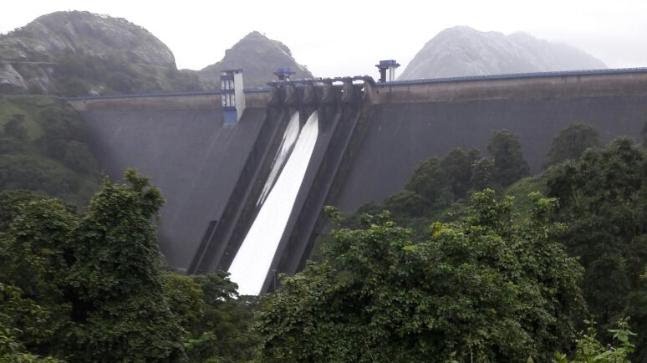 With the water level at the Idukki dam fast rising, two more shutters of the dam were opened on Friday, said a Kerala Minister.

Less rains on Friday though has brought some relief to the state that has seen 27 deaths in rain-related incident in over 48 hours.

The Army is taking part in rescue-relief and damage control exercises in Idukki, Wayanad, Kozhikode and Malappuram districts.

Several districts have been receiving heavy rains since Wednesday. Till Thursday 24 people had died, while three more deaths were reported on Friday.

Kerala Power Minister M.M. Mani who hails from Idukki, told the media here that the decision to open the two more shutters of the Idamalayar dam was taken to prevent the water level from reaching its full strength of 2,403 metres.

“Despite that opening, there has been a steady inflow and currently the water level in the dam stands at 2,401 metres. Hence the decision to release more water was taken.

“This is not going to create any issues as we are soon planning to close down the shutters,” said Mani.

He, however, pointed out that there could be problem at some places in Ernakulam and its nearby areas, as the water released from the Idamalayar dam could reach these places. “But we are confident that things can be controlled.”

State Revenue Minister E. Chandrasekheran, who is camping in Ernakulam and coordinating the activities said things were under control as the five teams of the Army were taking part in the damage control exercises in Idukki, Wayanad, Kozhikode, Malappuram.

“The central team is also here to assess the damages that were caused by the rains in July. Now that they are witness to the current situation — widespread destruction of crops and property, we are hopeful that they will be able to speed up their reports,” said Chandrasekheran.

In Thiruvananthapuram, Chief Minister Pinarayi Vijayan held a review meeting with top officials and lauded the defence forces for their help.

He also said that complete attention should now focus on rehabilitating people living in the low lying areas of Ernakulam district should it become necessary due to the water released from the Idukki dam.

The Cochin International Airport, which on Thursday had stopped incoming flights for two hours, on Friday said the operations were normal and there was nothing to be worried about.