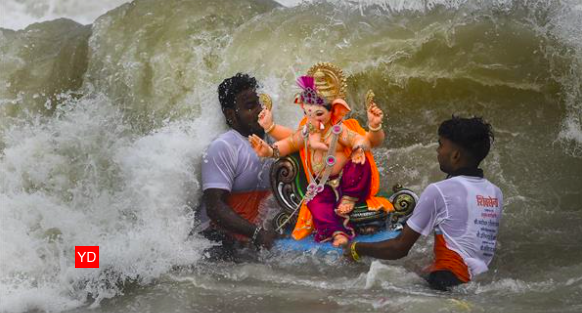 The Supreme Court Thursday granted “last chance” to Telangana authorities to permit immersion of Lord ”Ganesh idols” made of plaster of Paris in Hussain Sagar Lake in Hyderabad.

A bench headed by Chief Justice N V Ramana noted that this is a recurrent problem in Hyderabad and despite giving several directions, the state government has not complied with the orders of the Telangana High Court prohibiting the immersion of idols and curb pollution there.

The apex court passed the order after taking note of Solicitor General Tushar Mehta”s submission that steps have been taken to minimise pollution in the lake, and idols are lifted by cranes soon after the immersion and transferred to solid waste disposal sites for disposal.

“In view of the submissions, we allow this year as last chance, to use this lake for immersion of idols,” said the bench, also comprising Justices Surya Kant and Hima Kohli, while seeking an undertaking for the next year.

The apex court added however that discipline and cooperation of people is also important.

Mehta assured the bench that the directions will be implemented in entirety the next year, and there is no time to make arrangements this year and steps are being taken to minimise pollution.

The bench said, “Mr Mehta you are not aware a lot of money was spent for purification of the lake. Every year if you allow this immersion what is the point of that beautification or money spent. Its a waste. You should”ve taken steps. Last minute you”re coming!”

The Telangana High Court on September 13 had refused to modify its earlier order banning immersion of Ganesh idols made of Plaster of Paris (PoP) in Hussain Sagar Lake and other lakes in the city.

Hearing a petition filed by Greater Hyderabad Municipal Corporation (GHMC) seeking modification of order, the high court had said it is not inclined to do so.

On September 9, the Court had directed the state government not to allow immersion of Ganesh idols made of PoP in Hussain Sagar Lake and other lakes here.

After hearing a Contempt Petition, the court had directed the government to permit immersion of PoP Ganesh idols in baby ponds constructed by the GHMC or separate areas/ponds which do not result in the spread of pollution into the main water body.