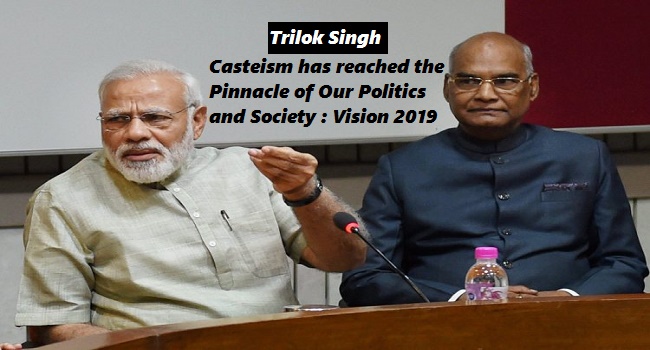 Trilok Singh, Highlighting Presidential Election 2017: BJP is preparing a strong base target for upcoming General Election by projecting a “Dalit” candidate with no corruption background, a clean face or we can say Mr. perfect face and also a Hard Core BJP Member. If we want to a prosperous country then we need not discriminate people or community by using these kind of words (“Dalit”).

PM Modi On twitter, Congratulations to Shri Ram Nath Kovind Ji on being elected the President of India! Best wishes for a fruitful & inspiring tenure.

Further PM Modi said on twitter, I also congratulate Meira kumar Ji for her campaign, which was in spirit of the democratic ethos & values we all are proud of…

However, The way PM Modi and Amit shah used “Dalit” word it’s clear for me and some of other authors and writers that BJP is also playing cast politics. E.g. In the 10 min speech of Amit Shah, he talked 5–7 mins about Dalit and related things… So, Our whole country is tired of caste based discrimination and definitely PM Modi was my last hope. I was anticipating he will do something that will help remove casteism in India…

May be Yes, BJP Played the “Dalit Card” very well for Lok Sabha Election 2019. Believe me he is the governor of my state (Bihar) and more than half of the Bihari’s had no idea who he was until his nominations and Victory too on July 20, 2017…

We know that Ram Nath Kovind, He is an well educated person, honest, no charges of corruption and fight for the poor he made him the perfect match for president. However, the main reason behind choosing kovind may also be :

Significantly, Even I have seen PM Modi used “Dalit” word in his speeches and as I know that “Dalit” means that “Daridra” & this word itself is a abusive for a particular community or people. In Contrast, Why not PM Modi change this particular word like he did for “Viklang” (physically handicapped) to “Divyang” and it will give a positive message to nation. The way Amit shah used Dalit word it’s clear that BJP is also playing cast politics.

Why in this time and age are we still talking about caste? How will the country move into the future with a leg still stuck in the past which is getting deeper and deeper stuck in the quagmire.

“The President of India enjoys a unique position as defender and protector of the Constitution, upholder of democratic traditions and as supreme commander of the Indian armed forces”.

Being a representative of the country to enjoy international trips using tax-payers money. So why pick a person based on caste. Only for politicising the post. Its very sad for our country that casteism has reached the pinnacle of our society.

Please Remember our past president Mr.Kalam. Further, Kalam was a scientist who played a leading role in the development of India’s ballistic missile and nuclear weapons programs. He also received the Bharat Ratna. Kalam was affectionately known as the People’s President, due to his extra-Presidential activities.

Some one told me that, BJP never opposed reservation. Although it has an image of being an “upper caste” party but never ever (apart from few exceptions) has BJP proclaimed to be one or done something against the lower caste. Let us see Ram Natah Kovind Role in upcoming times and its effects on Next Lok Sabha Election 2019….